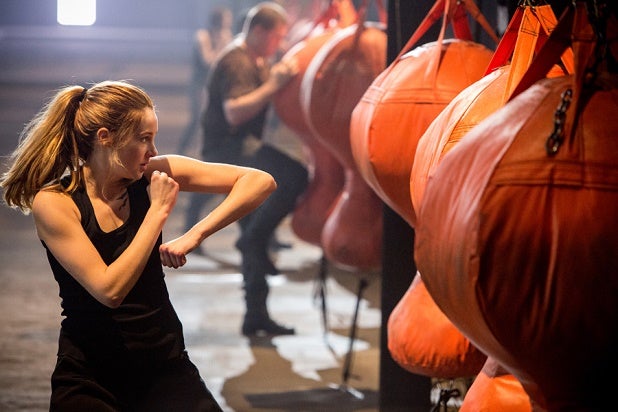 Even though the action-adventure film doesn’t open until March 21, it sold nearly half of the site’s tickets for the entire day, outselling the next biggest seller by nearly five to one, Fandango said.

Early tracking on “Divergent,” which is based on Veronica Roth‘s bestselling novels and stars Shailene Woodley and Theo James, has it opening in the same range as “Twilight,” another book-based young adult film that became a blockbuster franchise for Lionsgate and Summit Entertainment. They’ve already scheduled sequels for “Divergent” in March of 2015 and 2016.

Also read: ‘Divergent’ Star Theo James Does All His Own Fighting in New Behind-The-Scenes Look (Video)

“‘Divergent’ is off to a fantastic start,” said Dave Karger, chief correspondent for Fandango. “Its first-day ticket sales are showing all the signs of a blockbuster in the making. Veronica Roth‘s gripping story combined with effective marketing have resulted in a movie with strong want-to-see sentiment among its core audience.”

The anticipation over “Divergent,” directed by Neil Burger, has been heightened by the success of “Twilight” and “The Hunger Games” — another Lionsgate young adult blockbuster — and the failure of a string of recent book-based, teen-targeting movies like “The Host” and “Mortal Instruments: City of Bones,” which their studios had hoped would launch franchises.

The first “Twilight” movie opened to $69 million in November 2008. It eventually took in $192 million and spawned four sequels. Overall, the franchise brought in $3.3 billion globally.

Also read: How Does ‘Divergent’ Stack Up Against ‘The Hunger Games’ and ‘Twilight’?

In March 2012, the first “Hunger Games” opened to $152 million, and its “Catching Fire” sequel debuted to $158 million last year. Together, they’ve taken in $1.5 billion worldwide — with two more installments coming at Thanksgiving over the next two years.