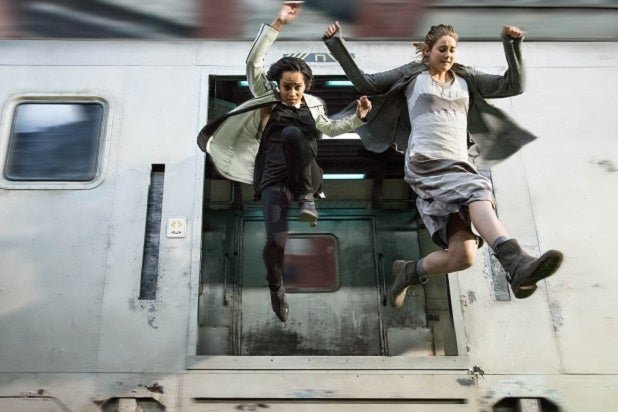 “Divergent” hits theaters Friday – and the timing couldn’t be better.

The big-screen adaptation of the young-adult bestseller, from Veronica Roth, promises to bring in an audience that’s been under-served this year at the box office  — young women — due to a slate dominated by films targeting guys.

Young teens and women are likely to turn out in major numbers for “Divergent,” which distributor Lionsgate hopes will launch a film series on par with its “Twilight” and “Hunger Games” franchises.

With the exception of “The Lego Movie” and “Mr. Peabody & Sherman,” the top films at 2014’s box office have appealed primarily to young men. Action films, like “300: Rise of an Empire” and Liam Neeson‘s “Non-Stop,” have raked in significant cash — as did “Ride Along” and “Lone Survivor” back in January — which isn’t a bad thing. The overall box office is up nearly 9 percent from last year, but balance is better.

Enter “Divergent,” which stars Shailine Woodley as Tris, a young woman living in a futuristic dystopia where teens are forced to chose which societal faction they want to live in for the rest of their lives. But Tris is “divergent,” and doesn’t fit into any one group.

“Divergent” has been tracking strongly and could match the $70 million debut of the first “Twilight”movie. Lionsgate knew it had another winner some time ago, and has already made plans for two sequels.

Box office fatigue seems to have set in among young males. The animated family film “Mr. Peabody” pulled off a second-week, $21-million win over the male-skewing, muscle car movie “Need for Speed” — as well as “300” and “Non-Stop.”

And while young males aren’t the primary demographic target, they will have a lot to do with just how successful “Divergent” and its sequels prove to be. The two “Hunger Games” movies have appealed to males more than the “Twilight” movies, and their box office results have reflected that. “Twilight” and “New Moon” brought in $805 million worldwide, “The Hunger Games” and “Catching Fire” have done $1.1 billion.

Hollywood’s studios have been chasing the Holy Grail of a hit young adult franchise for years — with little success. “Beautiful Creatures,” “The Host,” “The Mortal Instruments: City of Bones” and most recently “Vampire Academy” all tried and failed within the past year.

But that streak will end with “Divergent.”