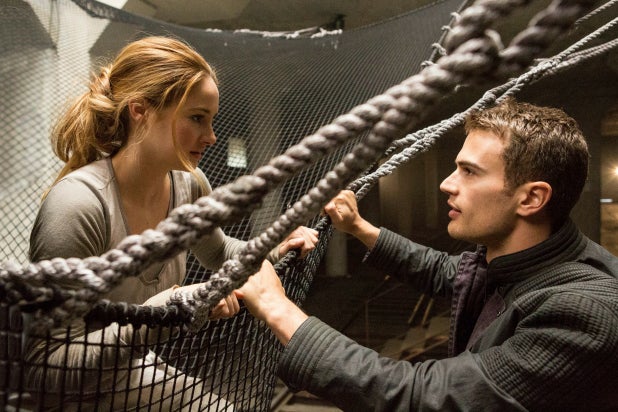 We know “Divergent” hit the mark with its $54.6 million opening and launched a franchise, “The Muppets Most Wanted” missed and the Christian-themed “God’s Not Dead” delivered way beyond expectations at the box office.

This past weekend was a little up from last year’s and the overall box office is still running about 9 percent of where it was at this time last year. But there were several stories that went beyond the numbers, and here are five takeaways that you might not have noticed:

Readers of Veronica Roth’s novels made up the core audience for Lionsgate’s big-screen adaptation, but exit numbers revealed that only 50 percent of the opening weekend audience for “Divergent” had read the book. That’s way down from the comparable numbers for “Twilight” (74 percent) and “The Hunger Games” (75 percent). But it’s a good sign that it’s appealing to people who haven’t read the books, and it should bring in more of those who have.

That’s good news for the Shailene Woodley-Theo James sci-fi adventure, which Lionsgate hopes can broaden beyond its core base over the next couple of weeks, as it goes up against “Noah” and then “Captain America: The Winter Soldier.”

The age and gender breakdown were encouraging from the same standpoint: the gender split was 59 percent female, not as high as it might have been, and it was evenly split between those over 25 and under 25 years of age. Both of those suggest there’s room to grow with younger males and older women, groups that meant a great deal to the success of “The Hunger Games.”

“God’s Not Dead” Had a Super Sabbath

The low-budget PG-rated drama about a college student (Shane Harper) who sets out to prove God’s existence to a skeptical professor (Kevin Sorbo) had a terrific weekend by any measure, taking in $9.2 million from 780 screens.

“I’d love to say we were expecting a $10 million opening weekend, but that would be lying,” said Mark Borde, co-president of Freestyle Releasing, which distributed the film produced by Pure Flix Entertainment and Red Entertainment. The movie featured “Duck Dynasty” stars Willie and Korie Robertson

The big showing by “God’s Not Dead” sets up a match up of Biblical proportions — as in David vs. Goliath — this coming weekend, when it will expand and go up against Paramount’s $125 million effects-laden Russell Crowe epic “Noah.”

DreamWorks’ “Need For Speed” has spun its wheels at the domestic box office. Its lackluster $7.78 million this past weekend — down 56 percent from its underwhelming opening — leaves it with a disappointing $30.4 million total. But it’s been in high gear overseas and been the top earning U.S. film abroad for the past two weekends.

Its international total is $96 million. Its brought in $41 million from China in just two weeks — well over its haul in the U.S. That’s unusual but not unprecedented. Warner Bros.’ Guillermo del Toro robot epic “Pacific Rim” topped its $108 million domestic total with $111.9 million from China last summer. And last fall, the Arnold Schwarzenegger-Sly Stallone prison break movie “Escape Plan” more than doubled its $25.1 domestic gross with nearly $41 million from the Mainland.

Hollywood tries to find a sweet spot with animated movies, appealing to kids while at the same time offering something that won’t make parents and adults grind their teeth, and that they might even enjoy. Last month’s “The Lego Movie” blended loud and colorful for the kids with a ton of hip pop culture references and giggles and it’s taken in a whopping $242 million dollars domestically as a result.

DreamWorks Animation’s “Mr. Peabody & Sherman” rode its combination of kids stuff and references to the 50-year-old TV cartoon segment it’s based upon to a No. 1 finish in its second week and is at $81 million domestically after finishing third with $11.7 million this past weekend.

But “The Muppets Most Wanted” — with its venerable Jim Henson puppets — managed just $17 million over the three days, under what Disney and analysts had expected. Ty Burrell, who voices Mr. Peabody and stars with Tina Fey and Ricky Gervais in the Muppets sequel, wasn’t all the two films had in common, however. There may have been one too many nostalgia-based — sorry Miss Piggy — kids film trying to woo parents in the marketplace.

Prior to its release, critics said that box-office interest in the crowd-funded “Veronica Mars” movie would be front-loaded and that it wouldn’t be able to expand beyond its base of rabid fans of the TV show. Two weeks in, it appears they were right. The comedy mystery starring Kristen Bell took in just $490,000 this past weekend, a major 75 percent drop that came despite distributor Warner Bros. adding 56 theaters.

That brings its box-office total to $2.8 million. That’s against a $6.2 million budget, $5.7 million of which came from the record-breaking Kickstarter campaign. The unknown here is how much the film has taken in from video on demand and online downloads. Warner Bros. still hasn’t released numbers from the first weekend, so it’s difficult to tell how it’s doing overall (it’s hard to imagine that the numbers wouldn’t be out if they were great, though).

Warner Bros. spent less than a million dollars on marketing, instead depending on its fans to generate buzz via social media. In addition, there was an intense pack-the-theaters campaign driven by the film’s stars and producer, director and co-writer Rob Thomas.

(Some of the box office numbers in an earlier version of this story were based on studio estimates. It’s been updated with the actual grosses.)