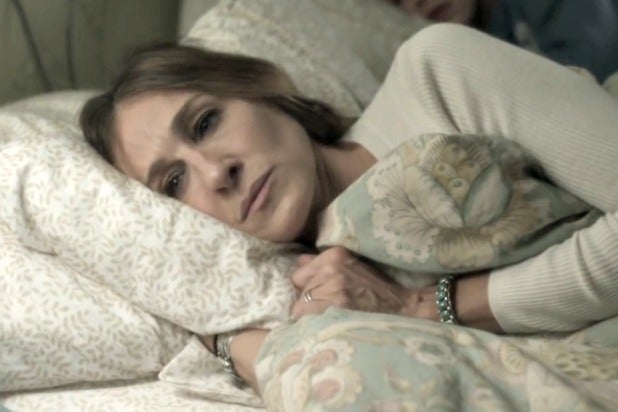 Mention Sarah Jessica Parker and HBO in the same sentence and it’s hard not to think of “Sex and the City.” Similarly, it’s hard to see a title like “Divorce” and imagine it being anything but a drama. Yet viewers are being asked to buy Parker in a new comedy about divorce, premiering on HBO Sunday night. For her part, Parker perhaps hopes the role will finally help her shed those infamous “Sex” days of cosmos and Manolo Blahniks.

As such the actress’s look on “Divorce” is anything but high-fashion. There are no tiny closets filled to the brim with haute couture and the female bonds of friendship (while somewhat present) take a backseat to the show’s central relationship. If anything, this might have been what Carrie Bradshaw’s life would have been like had she settled down with kids in the suburbs.

Regardless, “Divorce” may be one of the most aptly named fall entries yet, as it concerns a formerly happily married couple that realizes each partner can no longer stand the other. Parker plays the role of leading lady Frances, while a moustached-Thomas Haden Church plays her counterpart Robert. The downfall starts at a dinner party gone hellishly wrong, prompting a chain of events that lead the couple to examine their own relationship. It’s a deep dive into the nuances of a real conscious uncoupling, looking at where and how it fell off the rails and what the emotional repercussions for everyone involved may be.

Also Read: Sarah Jessica Parker Declares 'I Am Not a Feminist'

It all sounds like a tall order for a comedy, and indeed it is. But punching through the darker themes are lighter moments, mostly involving quirky character traits, zany friends (Molly Shannon‘s Diane character in particular is quite lavish), and situational humor that reminds viewers dark comedy is indeed still comedy. Then there’s Thomas Haden Church.

While most of the attention surrounding the show at the outset will inevitably be about Parker, Church’s Robert character is surprisingly underrated. In the pilot Robert isn’t exactly pictured in the best light given that this is Frances’s narrative, but as everyone is the hero of their own story his plight eventually makes him sympathetic in his own ways. As viewers begin to understand his motivations and watch him slowly unravel in the wake of Frances’s proclamations of wanting out of the marriage, Church plays that wide spectrum with aplomb.

Meanwhile Parker’s turn as Frances draws Carrie comparisons in other ways thanks to the philosophical questions she raises about marriage. That really is where the similarities end though, as marriage and its trials and tribulations emerge as something of its own character as the show presses on. Perhaps that’s why Parker stuck with the series through four years of development. How do you go from being wildly in love with a person to hating the very idea of them? There are complex, psychological and physical answers to consider, which is why exploring them over the course of a series is such a fascinating idea. Considering all the stories about meet-cutes, romance and marriage on television these days, this is the perfect antithesis. In comedy form, of course.

HBO actress meets with TheWrap for an interview and photo session

Photographed by JSQUARED for TheWrap