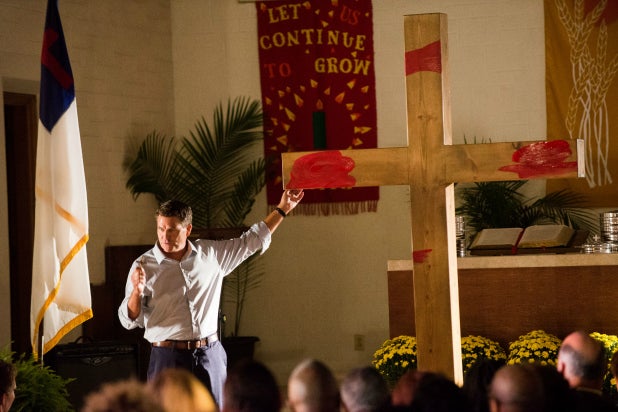 Contemporary faith-based cinema has enough problems in the writing and directing departments without also taking cues from “Crash,” a secular movie that’s as preachy and dogmatic in its own way as is “God’s Not Dead.”

The writers of the terrible, profitable “God’s Not Dead” are back with “Do You Believe?” which takes its cues from Paul Haggis‘ Oscar-winner, making a bunch of disparate characters cross paths while spouting the most on-the-nose dialogue imaginable. The result is another movie that will please some Christians, mortify others and utterly fail in its clear attempt to proselytize.

Also Read: ‘God’s Not Dead’ Isn’t Going Away, and Neither Are Faith-Based Films

No character in “Do You Believe?” can ever commit an act of kindness or charity or empathy or compassion without someone stopping and mentioning Jesus as often and earnestly as possible. Even for a movie with a distinctly apparent point of view, these lines of dialogue grind what little dramatic momentum there is to a halt; rather than allow the plot to unfold, the writers keep interrupting the story to remind viewers what it’s about.

Narrating the film (within an inch of its life) is Pastor Matt (Ted McGinley), who’s inspired by an encounter with a street preacher (Delroy Lindo) to give a sermon reminding his parishioners that faith isn’t enough; it must be translated into action. His words have a ripple effect that change the lives of many, including a married couple (Lee Majors and Cybill Shepherd) mourning the loss of their daughter; an EMT (Liam Matthews) and his nurse wife (Valerie Dominguez); her PTSD-afflicted brother (Joseph Julian Soria, “Army Wives”); a suicidal young woman (Alexa PenaVega); a pregnant teen (Madison Pettis); two gang members (Schwayze and Senyo Amoaku); a homeless woman (Mira Sorvino) and her daughter (Makenzie Moss); and a generous man (Brian Bosworth) with a troubled past.

This is the kind of movie in which white characters get deathbed miracles, while most of the people of color get to die to teach white people life lessons. The good Christian white people, that is; the non-believers are, to a person, supercilious smug jerks, including a doctor (Sean Astin) and his lawyer girlfriend (Amanda Logan White).

Screenwriters Chuck Konzelman and Cary Solomon, ironically enough, lack faith in the audience, in the characters and even in their own message; no singular moment gets to stand on its own and resonate dramatically. Instead, the movie stops to point out what just happened, and then comments upon it, and then reminds everyone about Jesus, who hasn’t been mentioned in almost two minutes. If you’re going to make propaganda, fine, but at least make good propaganda.

The cast of pros and faith-movie vets certainly sells the material as hard as it can — Shepherd’s and Sorvino’s hair gets cleaner and more styled the closer they get to the lord — although even they struggle with the occasional clutch-pearls moments in which we’re all clearly meant to be horrified by even a mention of abortion or, perish forbid, the American Humanist Association.

On a tech level, this looks like a 1990s made-for-USA-Network movie, and the score by Will Musser (“God’s Not Dead”) is the laziest kind of library-music uplift you can imagine. The coordinators of the big crash scene (as though this movie weren’t “Crash”-y enough) do a fine job of staging a multi-car pile-up on a rainy bridge; it’s one of the more elaborate (and expensive) moments in recent faith-based cinema, and it’s the highlight of the film.

When even Christian film critics are asking “Why do Christian movies suck?” one hopes that the time, money and energy expended on these films could go toward works with actual artistic merit that also spread the message that their makers want to share with the world. But wherever you fall on the spectrum of spirituality, the only answer to “Do You Believe?” is “No.”