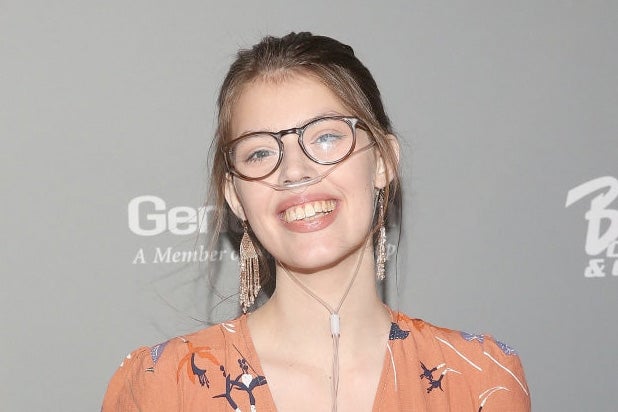 Claire Wineland, the cystic fibrosis activist and YouTube star who died on Sept. 2 at age 21, is the subject of a new documentary from Oscar winner Nicholas Reed.

Wineland, who was taken off life support one week after suffering a massive stroke following a successful double-lung transplant, had been working with Reed on the film for the final 18 months of her life.

Wineland was diagnosed with cystic fibrosis at birth and inspired millions of people through her popular YouTube channel, where she chronicled her battle with cystic fibrosis and helped “dignify people who are sick.” By Wineland’s own account, she spent nearly a quarter of her life in the hospital because of her disease.

All proceeds from the untitled film, slated for completion this November, will go to Claire’s Place Foundation, the nonprofit organization Wineland started when she was 13 to help families like hers living with cystic fibrosis.

Reed, who won an Oscar in 2014 for his documentary short “The Lady in Number 6: Music Saved My Life,” has been working on the film with Ryan Azevedo and Paul Foley from Realitary Pictures, as well as Phil Goldfine.

“After a week of intensive care and various life-saving procedures, it became clear that it was Claire’s time to go,” Laura McHolm, the chairman of the Claire’s Place Foundation board, said in a statement. “She was not in any pain, and the medical staff said it was the most peaceful passing they had ever witnessed.”

Reed, whose Oscar winner chronicled Alice Herz Sommer, the world’s oldest pianist and holocaust survivor who died in February 2014, said in his own statement: ” When I met Claire I was totally blown away. All my partners  instantly  said — she is the most amazing young person we have ever met, we have to do a film on her, and wow, with each meeting we were humbled more and more by her story.”