Lots and lots of people lined up to see the buzzed-about documentary, “Catfish,” with distributors from Fox Searchlight to Focus Features to Overture crowding into the small theater for press and industry.

At the end of the day, though, the film is an interesting but not a breakthrough tale of identityin the age of the Internet.

Nev Schulman is a 24-year-old photographer in New York, dark and handsome and a bit naïve (but in a good way). He meets an eight-year-old girl over the Internet, a prodigy who paints versions of his photographs and writes eloquent notes signed “peace and love.” She has a sexy older sister, Claire, with whom Nev starts an online romance, mainly via Facebook.

If you don’t yet see where this is going, you should: Schulman’s new Internet pen pals are not really part of a cool, creative family tucked away in northern Michigan. And as Nev begins to suspect a hoax, he sets out to find who is really behind the lyrical paintings and sexy text messages.

What is cool about the film is how much of it is captured on tape by Nev’s older brother Ariel and their buddy Henry Joost. 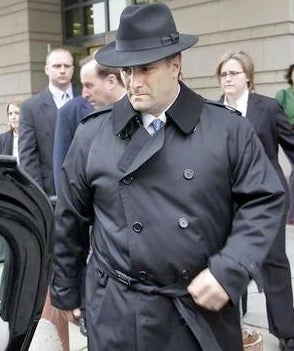 Personally I think the buzz comes partly from the New York cool-clique vibe around it; Andrew Jarecki (“Meet the Friedmans”) is a producer.

No bids so far, I’m told., but they’re expecting some.

Much more intricate is Alex Gibney’s exploration of the corruption of power in “Casino Jack and the United States of Money.”

It’s about super-lobbyist Jack Abramoff, how he leveraged his relationship to right-wing power broker Tom DeLay and fleeced clients including Native American tribes with a larcenous greed that he was kind enough to enshrine in emails.

Abramoff got so cocky, so greedy, that he actually sent a one-line invoice to a Native American tribe for $3.4 million. The invoice read: “Professional services.”

The film contains interviews with former Ohio Congressman Bob Ney, who went to jail for corruption induced by Abramoff.

Once he raked in cash for his campaigns from Abramoff clients eager to grease the wheels of favoritism. Right-wing stalwarts Grover Norquist and Ralph Reed are exposed as equally corrupt, though no one has ever indicted them.

Today Ney espouses public financing of campaigns. (To which one can only say: Wow.)

What’s stunning in the timeline of Abramoff’s reign of greed is how quickly he went from being a staunch, anti-regulatory right-wing ideologue to being a money-grubbing operator who would make Boss Tammany blush.

But all this happens, of course, in the context of the collapse of Wall Street, under the weightless weight of deregulation. The price we are all paying for that far exceeds any client overcharging committed by Abramoff.

But that’s not really the point.

To filmmaker Alex Gibney, Abramoff set the mold for the control that lobbyists now exert over Washington. Lobbyists have long existed in force, but Abramoff asserted his influence to a degree that hadn’t been seen before. He found new ways of funneling money – through non profits and fake grass roots organizations – that allowed far greater control of politicians by moneyed special interests.

“What Jack Abramoff did was nothing in monetary terms,” said Gibney in an interview after the premiere screening, attended by Bob Ney. “But because he was so extreme, he’s now part of the essential lobbyist playbook. He’s essential to seeing how it works.”

“For movement conservatives, they have a deregulatory agenda, but they participate in the most cynical, corrupt means to achieve it – which proves their point, that government is bad.”

Gibney visited Abramoff in prison, but was not permitted to interview him for the movie.

Is he contrite? Has he changed his philosophy?

Gibney said that Abramoff still espouses his anti-government, libertarian point of view, “but he sees lobbying as a bad thing, as corrupting. He sees the way to solve that as to take the money out of government.”