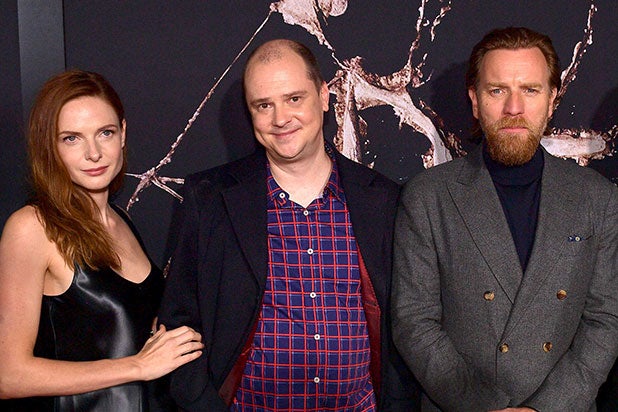 Ewan McGregor had some anxieties about starring in “Doctor Sleep” when he first considered stepping into the role of Danny Torrance for the sequel to “The Shining” — but the actor says they were quickly dismantled by the director’s Mike Flanagan’s “brilliant” script.

“It’s such a new direction. In a way, I think that’s what worried me when I first read it,” McGregor told TheWrap at the Los Angeles junket for the film. “It’s not ‘The Shining’ again. People who want to come thinking they’re going to experience the feeling of ‘The Shining’ again are going to get something Stephen King, and then Mike is taking it in a different, new direction and adding this whole new element, you know, with the True Knot and stuff, and I worried at first. Maybe people go, well, that’s not ‘The Shining’ you know, because it’s not, and that’s what’s brilliant about it.”

Flanagan, who most recently helmed the critically-acclaimed “Haunting of Hill House” series for Netflix, also felt an immense amount of pressure tackling the follow-up to Stephen King’s original novel and Stanley Kubrick’s acclaimed, still hugely influential 1980 film.  He credits “wonderful collaborators” for helping him get through that to tell a story “about sobriety and responsibility” that “resonated” with the entire team.

“From the jump, you can’t step into that legacy of Stephen King and Stanley Kubrick and not have a very healthy amount of pressure,” Flanagan said. “I had wonderful collaborators at every step of the way who were all excited about the movie for the same reason that I was, which was while we got to celebrate ‘The Shining’ and while we got to revisit that world and walk through The Overlook, which is so cool. At it’s heart, though, we were telling a new story that resonated with all of us for very different and powerful reasons. A story about sobriety and responsibility and about a world that is hostile toward what makes us special.”

“The sobriety part of this is something very personal to me,” McGregor added. “I live a sober life and have done for many years. And so this sort of alcoholism is something I’ve never really explored in my work. And I felt like to do that, to do something that personal, but to do it with somebody who you’ve just met who you feel this personal with, was a good combination.”

Co-star Rebecca Ferguson, who plays the film’s villain, Rose the Hat, admitted that she was spared a lot of the pressure experienced by her director and costar, thanks to the fact that her character is a new addition to “The Shining” universe.

“I think one of the wonderful things for me — and maybe a lazy thing to say — is that I don’t feel like I need to carry on the expectations because my character is new to this story,” Ferguson explained. “And what I get to do instead is to be really geeky and enter environments that I know from the previous film, but also bring my own sort of elements to it. So I’m putting all the pressure on these guys, which is so lovely for me.”

McGregor plays Danny Torrance, 40 years after the events of “The Shining.” Plagued by the same demons his father faced, Danny meets Abra Stone, a young girl who shares the same gift as him. They two must use their abilities against a rising threat: Rose the Hat and the True Knot. Danny is an extremely complex character who has experienced loss and trauma in his life, and McGregor took some guidance from the Master of Horror, Stanley Kubrick, himself.

“Kubrick was able to do some amazing things with this very blank, little boy. And there’s something very damaged about that blankness,” McGregor explained. “It was sort of a relief to watch the making of ‘The Shining’ where you see him being a little boy, and there is this funny bit where he is talking about the money he’s going to make. So that’s lovely to see, this bit of humanity, because you think, oh my god, that child was so damaged. Then we managed to start by doing all the drunk stuff. We talked about it before we started shooting, that it would be nice to be able to do that first for me because I suppose it’s a little nerve-wracking to go back into that world or just that headspace, and I thought it might be good to get a ticket out of the way and then just be able to physically grow that beard and have messy hair and then jump forward in time and be able to tidy that up.”

“Doctor Sleep” hits theaters on Friday. Stay tuned for the second part of our interview in which we discuss all the spoiler-y stuff.