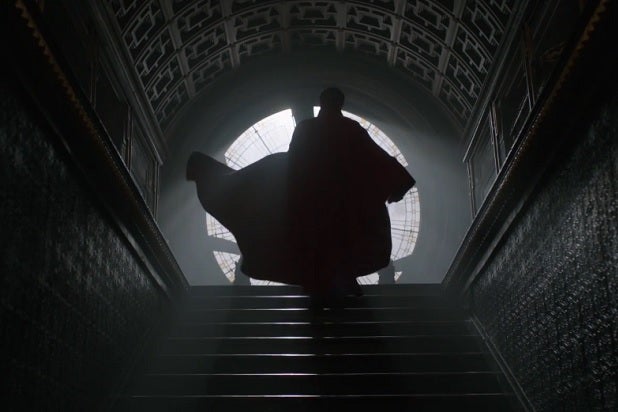 The further we get into the Marvel Cinematic Universe, the more these movies start exploring less mainstream hero characters. Having established itself as a movie franchise, the MCU can get away with movies focused on folks like Ant-Man or Doctor Strange or the Guardians of the Galaxy just because being a part of that brand inherently gives them an appeal they wouldn’t have on their own.

Still, seeing the mystical mumbo jumbo of “Doctor Strange” for the first time in Tuesday’s trailer has been disorienting for a lot of folks. Doctor Strange, played by Benedict Cumberbatch, is the weirdest of the Marvel heroes we’ve seen on screen so far. While the trailer did a good job of starting with the basics, there’s a lot more going on that bears exploring.

So we’re going to do just that, taking a look at Doctor Strange’s history in the comic book source material.

In the comics, Stephen Strange is from Nebraska. After high school he moved to New York to begin his medical schooling. By the time he was 30, Strange was a great and well known neurosurgeon.

Between his late teens and early 30s, each member of his family died in various ways — his sister Donna drowned, his parents of illness, his brother Victor was hit by a car while crossing the street. Strange put Victor’s body on ice in hopes that someday he’d be able to revive him somehow.

Strange gets into a severe car accident, but while he survives it, his hands suffer significant nerve damage. His career as a surgeon is over, but his pride won’t let him accept another related medical profession. So he abandons that career path all together and spends all his money looking for some way to fix his hands. To help pay his bills he does some not-exactly-legal back alley medical work.

He doesn’t make any headway, but when nearly all his resources are exhausted, he hears rumors of a person called The Ancient One, who lives in a compound in Tibet and has magical powers. Strange spends all his remaining resources to travel to Asia and pay The Ancient One a visit.

This mystical being, played by a bald Tilda Swinton in the movie, holds the title Sorcerer Supreme and is 600 years old. The most powerful mystic ever from Earth, the Ancient One is also the first being to ever be granted the title Socerer Supreme of the Earth dimension.

When Strange shows up in Tibet The Ancient One refused to fix his damaged hands, offering Strange an apprenticeship instead. Strange had no interest in that but ended up staying the night rather than leaving right away. That night, the jealous Baron Mordo tried and failed to take out The Ancient One, who easily bested him. Strange saw all this and, wanting to stop the threat of the power-hungry Baron Mordo, decided to stay and train with The Ancient One.

This is, roughly, the ground covered by the trailer, but of course there was a lot of other weirdness and talk about other realities and a bunch of “Inception”-style imagery that isn’t explained. So let’s talk about that mysticism for a minute.

Doctor Strange has the power of astral projection, meaning he can leave his body go anywhere he wants, whether it be on Earth, in space or other dimensions, very quickly. He can read minds and communicate telepathically. His cape allows him to levitate. He trained with martial arts in Tibet as well as magic arts, so he can physically fight very well. And he’s immortal. He’s got a billion other weird magic powers on top of this stuff.

But while he won’t die naturally, he can be killed. Since he’s still human he has all the physical weaknesses of any other person. He can only operate on the astral plane for so long before his body starts to deteriorate. And, of course, his body is defenseless when he’s zooming around in spirit form.

In addition to his cape that allows him to fly, Doctor Strange has a crystal ball with which he can view anything in the world or view other dimensions, and an amulet that allows him to know when someone is lying or see past events in his current location.

We see Rachel McAdams and Mads Mikkelsen briefly in the trailer, but we don’t know for sure who each one plays. McAdams is said to be in the role of one of Strange’s hospital coworkers. Mikkelsen is the main villain of “Doctor Strange,” but who that is remains a secret. Fans commonly speculate that he’s playing Dormammu, a Big Bad of the Marvel universe with whom Baron Mordo is secretly in league. Dormammu, “lord of the Dark Dimension,” is known to want to take over Earth’s dimension, so that could be the threat here.

We don’t see a couple notable characters. Wong, Doctor Strange’s manservant, who will be played by Benedict Wong. Wong is the latest in a family line devoted to serving morally good mystics.  Michael Stuhlbarg, too, plays Nicodemus West — the surgeon who saves Strange after his car accident and who later learns some healing magic but never completes mystic training.

And that’s your very brief primer to the world of Doctor Strange. It’s not a guarantee in any sense that the film will follow the source closely — Baron Mordo, for example, doesn’t come off as a particularly villainous character in this trailer. In any case, it’s a good starting point.