I was hoping the second half of this week’s “Doctor Who” episode would exceed the first part entitled “The Hungry Earth,” as the back half of two-part stories usually do. However, with the exception of the last 10 minutes I was left almost as cold-blooded as the Silurians and felt that much of the episode dragged on. 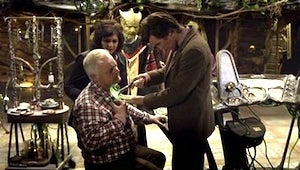 Despite this, the episode did have some good points. I give kudos to the fine supporting cast in this story. The performances of Nasreen (Meera Syal), Tony Mac (Robert Pugh), Ambrose (Nia Roberts), and their reptilian counterparts Alaya/Restac (Neve McIntosh), Malohikeh (Richard Hope) and Eldane (Stephen Moore) were all top notch and managed to transcend the oftentimes-general silliness of the plot.

The idea of us humans having to share the planet with the original Silurian inhabitants should have provided a little more drama that what it eventually did and I was a little disappointed at the outcome. This idea should have provided more tension, and the whole negotiation table scene could have been truncated. We all knew they wouldn't come to an agreement on how to share Earth now didn't we? Humans can't even manage to share a country or silly strip of land without wars, let alone a whole planet! It is an interesting idea that the Silurians will wake up in 3010 along with Nasreen and Tony Mac … but that's a tale for another time.

Oh my God, you killed Rory. You bastards!

The best part of the story came in the last few minutes with the death of Rory (Arthur Darvill) and the reappearance of the Crack. I’ve liked the addition of Rory as companion and hate that he bought it here at the hands of the Silurian She-Devil Restac. I'm hoping that it won't be the end of Rory since Time can be unwritten/rewritten.

It wouldn't be the first time a companion "died" only to be brought back somehow. Remember that Rose supposedly died, as did Donna, but really other things happened. Whatever the outcome proves to be with Rory and the broken-up TARDIS, it was some nice work there with Matt, Karen, and Arthur at the end of this episode. Poor Rory.

Best Parts: The Death of Rory

Worst Parts: The Death of Rory

I know I’m not supposed to break it up this way, but that's how I roll.