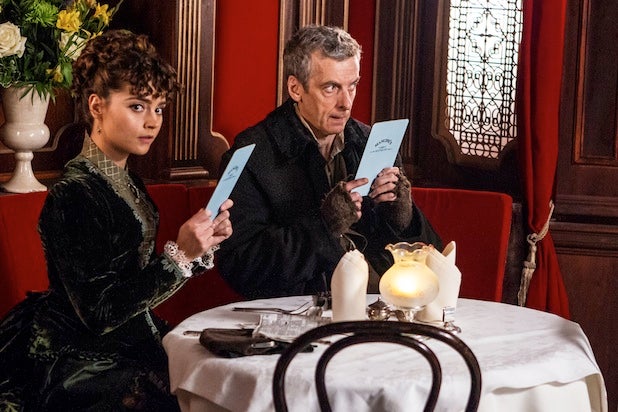 Peter Capaldi made his first solo spin (well, kind of, we’ll get to that) as the new titular character on “Doctor Who” Saturday on BBC America.

Every time the series introduces a new leading man, it feels as if we the viewers have to get through a courting ritual with him. After all, we just broke up with the last guy, whom we had fallen hard for, and now this new guy shows up and wants our heart too.

In many ways during the eighth season debut, returning companion Clara’s (Jenna Coleman) difficulty with relating to the Doctor represents our own journey to accept him as our new hero.

Aside from the physical differences between new and old Doctors, Clara must figure out how she fits in to the pair now. Capaldi’s Doctor, at once, is more independent than the former Doctors. Several times during the episode, he leaves Clara behind to do his own investigative work. And it leaves Clara (and the viewers) wondering how this partnership can continue.

The premiere episode’s primary storyline was pretty light. That was fine with me, because this was really about meeting the new Doctor. By mistake, the TARDIS transports a dinosaur (that had swallowed it) to Victorian London. But before a baffled Doctor can figure out how to return the prehistoric monster back to its time, it suddenly bursts into flames. These kind of spontaneous combustions have been reported all around town. In the end, we find the combustions are in fact murders by a group of human-wannabe robots covering their tracks after harvesting parts from victims.

Clara and the Doctor are lured to the robots’ underground lair because they want her parts and are forced to fight the robots off — with the help old friends Strax (Dan Starkey), Madame Vastra (Neve McIntosh) and Jenny Flint (Catrin Stewart). The battle comes to a head as the Doctor finds himself foiling the master robot’s escape high above London in a hot air balloon made from human skin.

After finding out that this race of robots have been re-creating themselves since the prehistoric times, the Doctor realizes that they won’t stop harvesting others for body parts with a good ol’ chat. So, he gives the master robot a choice: Either it plunges to the ground below of its own accord or the Doctor will push him. While both say that their “programming” doesn’t allow for those options, the Doctor says that one of them is lying. We next see the robot dead. Did it jump or did the Doctor push him?

The fact that we don’t know for sure if this Doctor is capable of murder (for the greater good, of course) underlines the real question in this episode: Do we still know the Doctor? That question will haunt Clara and she’ll express her confusion several times over the episode and finally to the Doctor’s face at the end of the episode.

In a confrontation with the Doctor, who left London after the caper but returns later for an angry Clara, she tells him how about her mixed feelings about him. And in a move that gives at least one answer to the choice of this older Doctor, he tells her that he isn’t her boyfriend. Romantic under and overtones have haunted the Doctor-Companion relationships throughout this newest block of the 50 year old franchise. This lays the groundwork for a friendship between Clara and the older Doctor going forward.

Then, she receives a call. (I can imagine this next scene had some Whovians shedding tears, said the TV writer with coal for a heart) It is the 11th Doctor (Matt Smith) calling just minutes before his regeneration across time — he must have an excellent voice plan. The previous Doctor will ask her to accept him in whatever form he becomes even if she can’t recognize him in his new iteration. Deep down, he says, the Doctor is more afraid than she is and he implores her to see him in this seemingly new person. In the end, she finds what she needs to recognize in the new Doctor and they’re off to coffee. To be continued…

See photo: Peter Capaldi’s ‘Doctor Who’ Will Be Darker and ‘A Lot Less Patient’

Capaldi brings his own brand of frenetic energy to the Doctor. But the darkness within the character that was deeply explored last season makes this one heavier from the get go. Is this older, less romantic, more sophistically dressed reincarnation supposed to right the wrongs — such as romantic attachments — of previous Doctors in order to carry out their lives’ work more efficiently? We’ll know over time, I guess.