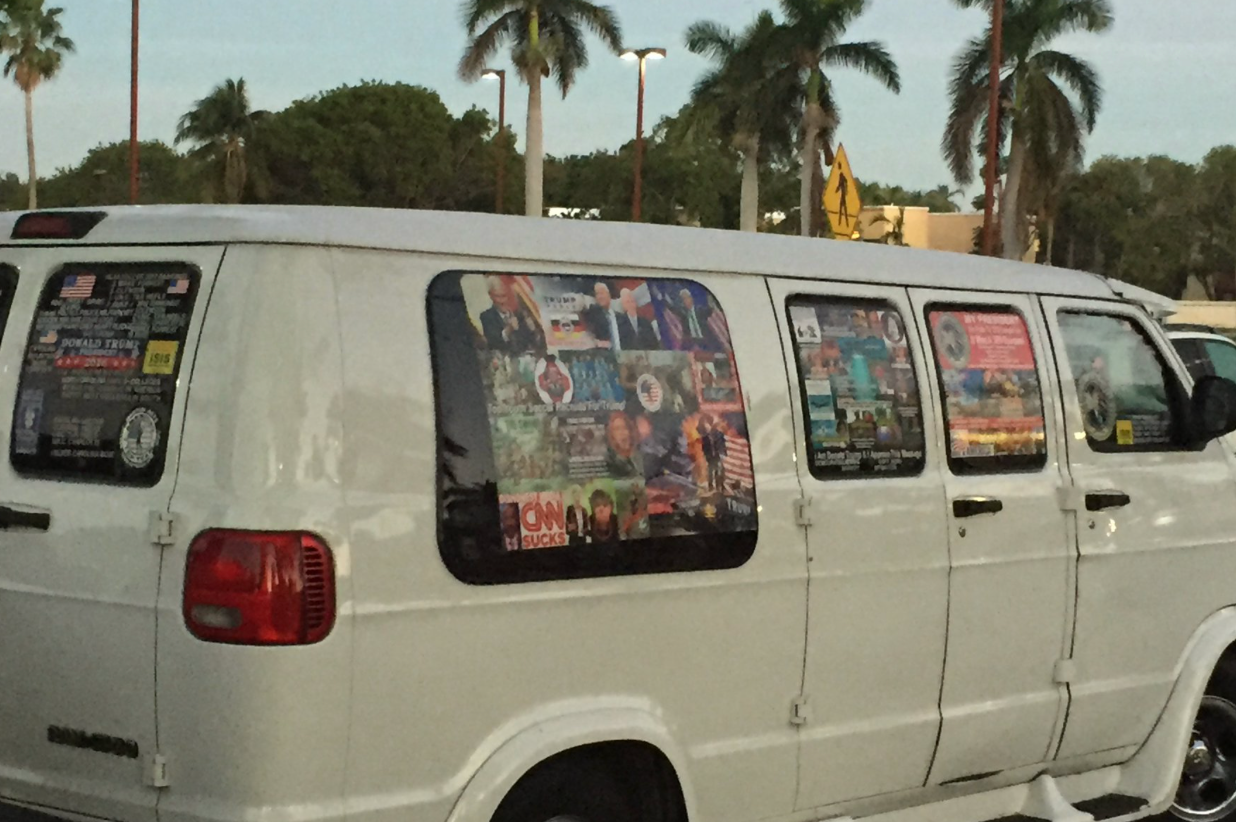 David Cypkin’s girlfriend texted him a news story Friday morning, soon after Cesar Sayoc was arrested on suspicion of sending multiple mail bombs. She asked him: “Is that the van??”

It was the van. On Dec. 31, 2017, after months of seeing the van parked in front of a Jewish grocery store near his south Florida home, Cypkin, a documentary filmmaker, took some pictures of it — and wondered about its owner.

It was the same van authorities seized Friday — a van covered in pro-Trump, anti-Democrat and anti-CNN stickers. CNN and some of the Democrats received mysterious, potentially explosive devices this week.

Cypkin, a producer whose documentaries include “Cocaine Cowboys,” is well aware of the right-wing conspiracy, already circulating online Friday, that the van was a Hollywood creation, designed to trick people and manufacture a Trump connection to the mailings. So he tweeted not only his photos, but also metadata showing that he took them on the last day of 2017.

He is not the only one who says he saw the van long before Friday. South Florida TV station WPLG 10 aired live video Friday morning of Sayoc’s van as authorities towed it from an auto store parking lot in the town of Plantation.

On Friday, the van had more stickers than it did in Cypkin’s photos. But several stickers — including two American flags on the left rear window, and a large image of Trump on the right driver’s side — are the same in the old and new images.

“Immediately, viewers and social media followers inundated the station with pictures from when they had seen the van on South Florida streets,” WPLG wrote. “With decals covering its windows from top to bottom, the van was very hard to keep under the radar.”

Cypkin told TheWrap he had turned his photos and metadata over to the FBI. Here’s video from WPLG of the van being seized Friday, followed by Cypkin’s images.

I took photos of this van in December on a morning walk with my dog. I was always unsettled that it was parked directly across from Sarah's Tent, a kosher market. It often had the back door ajar and/or window cracked open as if it was occupied. pic.twitter.com/QXsscOiWHv

from Photos on my Mac: ID's date and location pic.twitter.com/jKYSVwCdI0

“I had seen his van dozens of times and I was always a little unsettled by it,” Cypkin said. “I would walk my dog every morning at around 6 o’clock in the morning…  I would see the van not every day, but often. The crazy stickers covering the windows struck me. I found it disturbing that the van was parked right in front of a kosher supermarket.”

He suspected someone might be living in the van, and said a door or window was often cracked open, as if the person inside was trying to get some fresh air in the Florida heat.

He took the photos in part because he wanted to look at the van closely, without staring or disturbing whomever was inside. He saw a man in the van at least once, but didn’t get a good look at him, he said.

“I couldn’t identify him in a lineup,” Cypkin said. “It was an older man, that’s all I could tell.”

“I figured a guy who would have a van like that might be looking for problems and might have a couple problems,” he added. “And I didn’t want to be any part of it.”

He said the van was “there at least a year. … I have seen it as recently as July.” He moved from his home near the shopping center in August.

Did he take the picture in case something happened later involving the van? Not necessarily, he said.

“I’ve often taken pictures on walks,” he said. “The van struck as something notable and a bit disturbing.”

Sayoc, who was in law enforcement custody, could not be reached for comment Friday. The Washington Post spoke with Daniel Aaronson, an attorney who has represented Sayoc in the past, who told the Post that none of his clients were “as polite and as courteous and as respectful to me” as Sayoc.

He said Sayoc had never discussed his political views.

“In fact, I am a Democrat,” Aaronson told the Post. “I am very proud of some of the people that were targeted . . . so, if he had said anything along those lines, I certainly would have noted it, because we would have gotten into a political discussion.”

In one case, Aaronson said, Sayoc was accused of grand theft for stealing a suit. In another, he was charged with theft after going through a store checkout line without showing one of his items to a cashier.