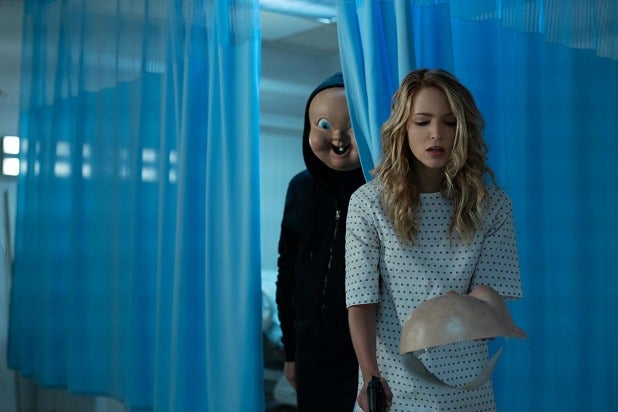 “Happy Death Day” has officially turned its slasher movie crossed with “Groundhog Day” premise into a franchise with “Happy Death Day 2U,” a sequel that revives the original film’s premise with a new science fiction twist.

Lead actress Jessica Rothe returns along with pretty much all of the original cast. Israel Broussard, Phi Vu, Ruby Modine, Rachel Matthews and Charles Aitken are all back, along with writer/director Christopher Landon. “Happy Death Day” is now officially a horror franchise.

To answer your question directly: Yes, “Happy Death Day 2U” does have a mid-credits scene that comes up a few minutes after the credits start to roll. It feels more like just a bonus gag than a tease for another sequel, though it certainly could work as a setup for a third “Happy Death Day” film if the filmmakers wanted to go that route.

Spoilers ahead for the mid-credits scene in “Happy Death Day 2U.”

Seriously. You have been warned.

So the extra mid-credits scene picks up after Tree (Rothe) returns safe and sound to her own dimension. She and her friends are picking up trash as part of what I presume is a community service sentence handed down for the whole incident with Sissy, when they’re visited by a man in a suit from DARPA.

It turns out that DARPA confiscated the time loop device but can’t figure out how to make it do anything, so they want to recruit our heroes. And, yes, that means they want to intentionally stick someone in a time loop. And Tree says she knows the perfect candidate.

She chooses Danielle (Matthews), her annoying sorority sister. In the final shot of the scene, we see Danielle wake up screaming — presumably this means that she’s experiencing exactly what Tree did over the last two movies.

So there you have it. That really does come off just as a funny gag to end the movie with, but it’s within the realm of possibility that a third “Happy Death Day” movie could focus on Danielle instead of Tree. But we don’t know anything for sure about future plans for this series, or whether there actually even are plans beyond Landon and producer Jason Blum wanting to make more of these movies.

I guess we’ll find out someday.