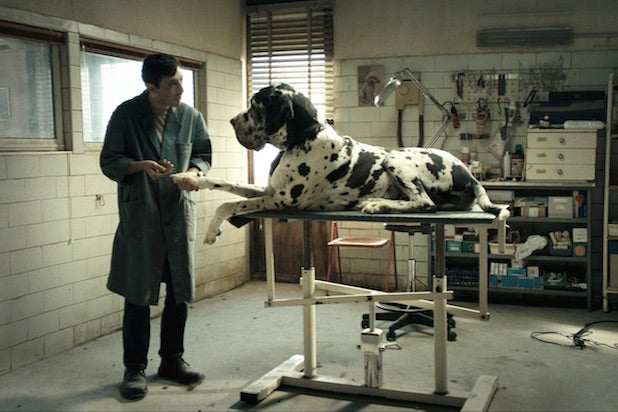 There’s a common screenwriter trick called “saving the cat” — a well-trodden shortcut to build instant sympathy for your protagonist by having them show kindness to an animal. Pay attention and you’ll see it everywhere, but nowhere more audaciously than in Italian director Matteo Garrone’s “Dogman.”

Early in the film, small-town dog groomer Marcello (Marcello Fonte) learns of an animal in dire straits, a poor dog stuffed into a freezer by pair of nervous house burglars. How does Marcello learn this distressing information? Why, he’s the burglar’s getaway driver, and once he drops them off he turns right around to break into the house anew in order to save the pooch.

(Fret not, he succeeds.)

It’s a daring move that banks a lot of good will — and thankfully so, because that’s about the last good decision the poor sap makes for duration of this tight, muscular film about a good man’s descent into savagery.

The plot is almost radically simple. In a rundown seaside town, the full-time dog groomer and part-time coke dealer Marcello gets pushed to his breaking point and then far past it thanks to his violent interactions with drug-addled thug Simone (Edourdo Pesce).

Standing a full foot taller than the pint-sized Al Pacino doppelganger Marcello, the hulking brute Simone imposes his will through sheer physical force. Simone pushes and pushes until Marcello eventually breaks and snaps back, with the larger narrative arc playing like a Neapolitan riff on “Straw Dogs,” only between two men and told with brooding, pared-down quiet.

Though he took his inspiration from a real-life case, Garrone (best known for his 2008 film “Gomorrah”) offers no “based on a true story” title card or anything of the sort.

In fact, he offers very little dialogue altogether, instead allowing most of the narrative play in the posturing pas de deux of the two very different men. When Simone hovers over the nervous Marcello, egging him to, say, act as his getaway, the overt difference in size between the men does all the talking.