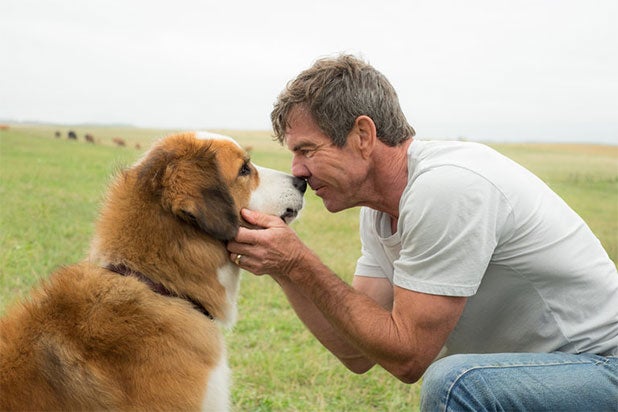 Turns out, a leaked set video in which a dog seems to be forced into roaring water isn’t the only thing that is tainting people’s perception of “A Dog’s Purpose.”

Critics aren’t being easy on the film starring Britt Robertson, Dennis Quaid and Josh Gad. One day ahead of its opening, the film has a score of 27 percent on Rotten Tomatoes, with critics calling it “forgettable,” “inauthentic” and “manipulative dreck.”

“A Dog’s Purpose” was directed by Lasse Hallstrom, whose credits include “The Hundred-Foot Journey” and “Dear John,” and who is attached to direct next year’s “The Nutcracker and the Four Realms.”

Universal canceled the premiere and the film’s press junket, though the studio, production company Amblin Entertainment, and the film’s producers have refuted claims that the dog was abused or injured during the making of the film.

“All of Bailey’s lives are shot with gradually decreasing brightness, until Bailey ends up chained to a post outside a run-down house owned by a couple that in an edgier film would have probably been meth addicts. That sequence is shot in a muted gray, but then Bailey escapes and follows his instincts back to the farm where he lived out his second, best life, now owned by an adult Ethan (Dennis Quaid). Newly bathed in sunlight, the film once again amps up the sentimentality, culminating in a groan-worthy title line. So what is a dog’s purpose? To provide gentle, forgettable entertainment for moviegoers who lament that ‘they’ don’t make ‘nice’ movies anymore, apparently. For the rest of us, it’s more like a 100-minute nap.

“What is the meaning of life? Are we here for a reason? Is there a point to any of this? We may never know, but knowing this movie exists may bring some viewers one step closer to giving up on the whole damn thing.”

“Directed by Lasse Hallström, ‘A Dog’s Purpose’ has the gooey, inauthentic feel of a Hallmark Channel movie. The script, a product of no less than five screenwriters, knows how to manipulate an audience’s emotions but does so mechanically, making only the barest attempts to ground its schmaltzy melodrama in anything resembling genuine emotion. The film is at its best when it drops its narrative pretenses and simply indulges in puppy porn, as in a completely gratuitous scene of Bailey playing with a small donkey. But more often than not, the film operates in bathetic overdrive, exploiting the genuine affection people feel for their pets for cheap emotionalism.”

“Ultimately, the film’s quality makes my quandary of whether or not I should endorse the film moot – I don’t think I would recommend ‘A Dog’s Purpose’ regardless of any behind the scenes issues. It’s certainly not the worst film you’ll see this year, but it’s one I’m willing to bet you won’t remember by the end of it.”

“Controversy over the treatment of one of the animals during filming of ‘A Dog’s Purpose’ has led to some calls for a boycott of the film. Don’t let that sway you. There are plenty of other reasons not to see it. Lasse Hallström’s film, based on the bestseller by W. Bruce Cameron, tells the story of a dog who, for reasons never questioned, is reincarnated time and again as he tries to figure out his purpose. It’s often cloying, absurdly melodramatic, and the premise exists largely as a tear-manufacturing device.”

“You don’t need an animal-rights group’s boycott to give you permission to avoid ‘A Dog’s Purpose.’ You can skip it just because it’s clumsily manipulative dreck.”

“The main character, Dog, dies in multiple wrenching scenes and is subsequently reborn; during his many lives, his thoughts are voiced by Josh Gad, and he engages in a lot of internal doggy eschatology, wondering about the meaning of life and what he’s meant to do. Well, a dog’s purpose, it turns out, is to be reincarnated into a different sappy mini-Hallmark movie after every death.”