Dolby Laboratories will introduce a new surround-sound audio format, Dolby Surround 7.1, with the release of “Toy Story 3” on June 18.

In a presentation at the Academy’s Linwood Dunn Theater on Thursday afternoon, representatives from Dolby, Pixar and Disney demonstrated the new format, which adds additional surround channels to allow filmmakers to position and move sound with more precision than can be obtained under the current Dolby 5.1 format.

“Digital cinema had raised the bar when it comes to images,” said Dolby’s technical marketing manager, Stuart Bowling. “We wanted to look again at audio to see what we can do differently, and how we can immerse the viewer more in the experience.”

The new system is designed to particularly aid in the placement of sound in 3D films, though it can also be used with 2D content. 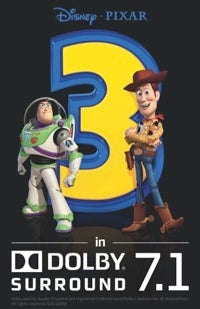 “Toy Story 3,” said Paul Cichocki, the Pixar post-production supervisor on the film, was designed from the start to take advantage of the new format.

“We really wanted to push the sound to be another thing we could use to tell the story,” said Cichocki. “We found ourselves doing things that we wanted to do with 5.1, but couldn’t.”

For theaters that are currently wired for Dolby Digital Surround EX, as are many 3D theaters, the transition to 7.1 is a simple one that can be accomplished with a free upgrade or at most a $100 audio cable, said Bowling. Theaters not wired for Surround EX will need an additional $800 amplifier and cables.

Cinemas that do not already have them will also need to purchase Dolby cinema processors, which currently have a list price of about $5,500.

Currently, about 250 theaters in the United States are equipped for 7.1, with around the same number outside the country.

“When we started Dolby Digital with ‘Batman Returns’ in 1992, we were in 10 theaters,” said David Gray, Dolby’s VP of worldwide production services. “Dolby Digital Cinema started with ‘Chicken Little’ in 84 theaters. This rollout is going way better, way faster and way bigger than any previous rollout we’ve done.”

On the production side, though, the new format can be more expensive. Gary Weaver, senior vice president of administration at Disney, says it takes an additional half-day on the mixing stage to prepare a 7.1 mix – but that’s a half-day for each language in which a film will be released.

In the case of “Toy Story 3,” which is initially being released in 12 different languages, the 7.1 mix adds six days to the production schedule.

The Dolby 7.1 format uses eight separate audio channels: left, center and right channels whose speakers are situated behind the screen; a “low-frequency effects” channel typically located behind the screen and low; “left surround” and “right surround” channels that can be heard on the sides of the theater; and rear “back surround left” and “back surround right” channels.

Dolby 7.1 has been used in Blu-Ray and DVD content in the past, but those soundtracks were not originally created using the format.

CORRECTION: The original version of this story incorrectly stated that Dolby 3D began with "Chicken Little."  In fact, that film was the launch of Dolby Digital Cinema.  Dolby 3D was launched with "Beowulf" on 75 screens in 2007.