After the performance, she welcomed Parton — who was hosting the awards show — onto the stage at the Allegiant Stadium in Las Vegas.

“I know that Whitney is smiling down on us tonight, so thank you very much. She would be proud of that,” Parton said after the took the stage, referencing the late icon Whitney Houston. Parton wrote the song in 1974, which Houston covered for “The Bodyguard.” It’s one of the best-selling singles of all time.

Parton appeared to be just as moved by Clarkson’s performance as the rest of the audience, admitting: “I was backstage trying not to cry my false eyelashes off, slinging snot in every direction and tears. But anyway, that was an amazing job!”

Following the show, Parton called it “a night to remember” on social media. 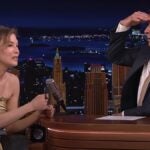 Also Read:
Renée Zellweger Had an Allergic Reaction to ‘The Thing About Pam’ Prosthetics: ‘Y’all, Lots of Benadryl’