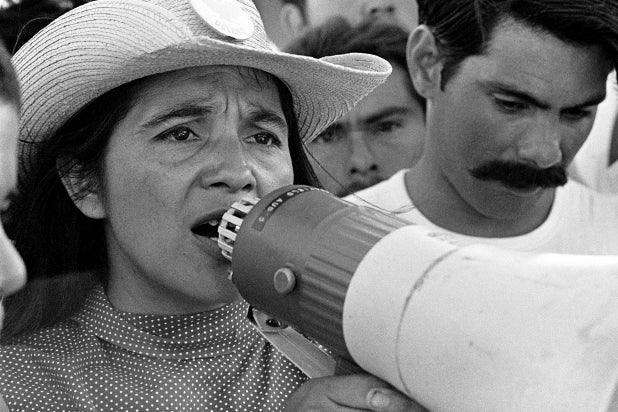 Women cannot be written out of history, asserts one of the 11 children of labor leader and civil rights activist Dolores Huerta, the subject of the powerful documentary “Dolores.” Huerta’s contributions were massive, but largely undervalued.

Director Peter Bratt (“La Mission”) is hoping to right that wrong with his comprehensive film chronicling the continuing efforts of Huerta since beginning her work with California farm workers in 1962 and co-founding the United Farm Workers (UFW). Huerta is 86, but looks a couple decades younger. She is still going strong as a community organizer and made a speech at the Women’s March on Main Saturday morning at the Sundance Film Festival.

The lifelong activist urged people to do more than just march. “We cannot just talk to each other,” Huerta said calmly, but forcefully. “We have to talk to people who are doubtful, those who are in fear. You all need to go back to your hometowns and organize at the local level.” That is exactly what Huerta, the daughter of a field/farm worker, has been doing for 60-plus years when she began her crusade to correct economic injustice. At the rally following Saturday’s march and after the film’s first screening on Friday afternoon, Huerta, a role model in the Latinx community, got a prolonged ovation.

The documentary traces her dedication and activism for the rights of migrant farm workers. She founded the United Farm Workers with Cesar Chavez, and was just as influential as Chavez, but historically, the credit has gone to him. Huerta doesn’t seem particularly perturbed at being left out of the narrative. In the film, she comes across as straightforward and modest, preferring to focus on the movement itself rather than on her part in it.

Still, Huerta was sidelined by the board — all male — of the United Farm Workers. When Chavez died in 1993, many expected Huerta to be chosen to head up the organization. The implication is that sexism led to the naming of Arturo Rodriguez as president instead. Rather than making her embittered, this turn of events seems only to have made her more determined to fight for the rights of women and minorities.

Huerta resigned from the organization but has never stopped working for the rights of laborers. The tagline for the film is “The Fight Continues.” These days the octogenarian leads the Dolores Huerta Foundation, which trains community organizers. She endured years of criticism based on both gender and ethnic stereotypes, but persevered.

The film includes two instances of Fox News’s commentator Bill O’Reilly saying he had no idea who Huerta was. One would have sufficed. (We get it: O’Reilly’s clueless about Latino icons.) In the documentary (co-produced by actor Benjamin Bratt, the director’s brother, and executive produced by musician Carlos Santana), we get a potent sense of Huerta’s unflagging determination.

She tirelessly urged people to boycott grapes and protested the conditions for workers on farms in central and northern California. Huerta negotiated contracts between the farm workers and grape growers and wine companies. (The grape boycott resulted in the California table grape industry signing a three-year collective bargaining agreement with the UFW in 1970.)

We also learn of the personal cost of her commitment, the months spent away from her children while they were growing up. Several of her children are interviewed in the film, speaking candidly, and often tearfully, of the years without their mom, as she doggedly fought agribusiness and grape growers. We learn of the regard in which she was held by the late Robert F. Kennedy. Huerta was standing nearby at the Ambassador Hotel when Kennedy was shot after winning the California Democratic presidential primary in 1968.

Huerta succeeded in securing improved working conditions, health care benefits and other rights for farm laborers, but she also suffered: At a peaceful protest in San Francisco, the then-58-year-old Huerta was badly beaten by a police officer. The beating was caught on videotape and shows a police officer ramming his baton into her torso, breaking several ribs. She was nursed back to health by her children, several of whom have followed in her activist footsteps, by heading up her political foundation and working in law and education.

Also Read: Fiery Hollywood Women Rally in Sundance: 'We Will Not Go Backwards'

She turned her efforts to women’s rights. We learn of Huerta’s friendship with Gloria Steinem. Despite being a lifelong Roman Catholic, she discusses how her position against abortion evolved into a pro-choice platform.

What the film could have provided more of was early context. We get only snippets about her childhood — she was raised by a single mother active in community affairs — and get fewer details about her two marriages and long relationship with Richard Chavez, Cesar’s brother, which resulted in four children. Presumably that was intentional, to keep the focus trained on Huerta’s achievements and not on her personal life, but fuller context would only make her accomplishments that much more compelling.

“Dolores” artfully blends riveting archival footage with present-day commentary from such contemporaries and fellow activists as Luis Valdez, Angela Davis and Steinem. The film touches on disagreements between Chavez and Huerta. In filmed interviews from the 1960s and ’70s their interaction feels alternately amiable and strained. (The timing for the film’s Sundance debut, on Inauguration Day, added even more resonance to the story of a powerful woman.)

Huerta comes across as warm, wise and indefatigable in Bratt’s provocative and inspirational film, but he doesn’t engage in hagiography. She openly discusses her regrets and mistakes, while the documentary posits that she was deliberately erased from the historical record.

With any luck, “Dolores” will move the needle, enlightening viewers about the formidable Huerta and raising awareness of her rightful place in civil rights history.