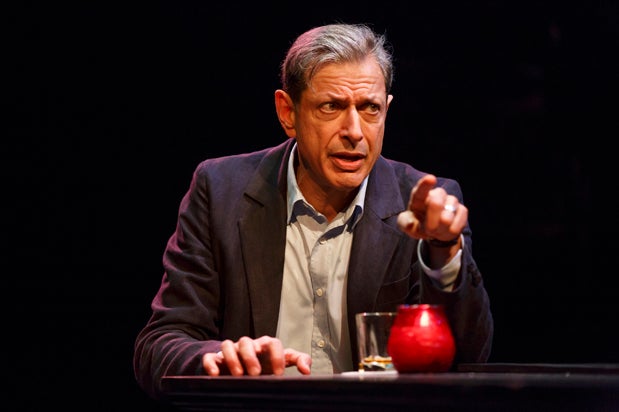 Bill, a chronic liar and philanderer who has spent $74,000 on very young prostitutes to indulge in S&M sex play, is a horrible cad. But many of the women around him – there are nine actresses on stage plus one transvestite (Robin De Jesus), who nearly blinds Bill after a discussion on gender identity turns overly heated – are worse. At least that’s the way it appears in the immensely entertaining first act.

Going to the theater can often seem like an exercise in déjà vu: There are lots of revivals, too many plays are pale imitations of classics, and most musicals are based on movies from 20 or 30 years ago. Norris is that rare playwright who’s totally up-to-date — with his Pulitzer Prize-winning “Clybourne Park,” the more recent “A Parallelogram,” and now “Domesticated.” His latest opens with one of those all-too-common news conferences in which a disgraced politician is having to resign from office over some sex scandal while his faithful wife stands by in stoic, pained silence.

After that extremely brief talk with reporters – no questions, please – Goldblum has little else to say in the first act. It’s like the reverse casting of Janet Leigh in “Psycho.” The star of this show is often on stage, but he is just sits or stand there for much of the first hour – silent and suffering and abused by the grandest collection of loud, aggressive and territorial females since Clare Boothe Luce wrote “The Women” nearly 80 years ago.

Back in the Pleistocene of feminism, it was often asked, “What do mothers tell their sons that they don’t tell their daughters?” Bill’s daughter Casey (Emily Meade in a pitch-perfect very-polished-nails-on-chalkboard performance) is evidence of what happens when mothers – in this case, Judy, played by the super-charged Laurie Metcalf – tell girls to forget about being demur and be tough at all costs.

Bill’s wife, Judy, of course, never had such a mother, so she’s been stuck for the last 30 years trying to please her husband, career-wise as well as sex-wise, until the day of that humiliating press conference. Now it’s time to unload, and, oh sister, does Norris let the aggrieved Judy unload on Bill, with much help from an alpha attorney (Mia Barron), a patronizing shrink (Mary Beth Peil), an overbearing talk show host (Karen Pittman), a pampered mother-in-law (Peil again) and, most important, a brilliant director, Anna D. Shapiro, who also helmed “A Parallelogram” at Steppenwolf and the Mark Taper Forum.

Act one of “Domesticated” is all about Judy. But act two belongs to Bill. And Norris doesn’t waste much time letting us know what Judy has been dealing with for 30 years.  And regarding the way Bill talks to his female patients after he unsuccessfully resumes his medical career, it’s clear that what really happened between him and the young prostitute is not the accident he claims.

Goldblum is an inspired piece of miscasting. From that opening press conference, who can buy him as a bland politician? And so we wait for all of act one to see his kinky side. Goldblum doesn’t disappoint when Norris lets him open his mouth.

“Domesticated” is structured as a series of studies on mating games. Misha Seo, who plays Bill and Judy’s curiously silent adopted daughter, narrates the non-human examples with videos and the drollness of a first-year biology student. She informs us, for example, that the female hyena has an extended clitoris that receives much attention, while the penis is rarely licked “since the status of the male will always be lower than the lowest of the low.”

Bill doesn’t like the connection to the animal world: “What am I, a salmon? I’m supposed to mate once and then die? No. We’re a promiscuous species.” By species, he means men, not humans. And that’s why, after a few more political sex scandals like Bill’s, the women of the world will definitely rule.