Over the years, Orson Welles has been portrayed on film and on TV by Vincent D’Onofrio, Liev Schreiber, Danny Huston, Carsten Hayes and more than a dozen more actors, all of whom tried to embody the enormous, larger-than-life actor, filmmaker and mercurial genius responsible for “Citizen Kane,” the “War of the Worlds” radio panic, the groundbreaking Mercury Theater, and those regrettable Paul Masson wine commercials, among his other accomplishments.

Some of the actors have fallen short, some have been terrific, and some have played it for laughs.

But nobody that I’ve seen has commanded the screen as Welles the way a little-known British actor named Christian McKay does in Richard Linklater’s “Me and Orson Welles,” tonight’s entry in theWrap Screening Series at the Arclight Sherman Oaks. 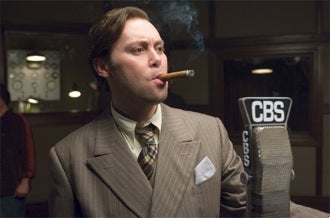 If Welles was a force of nature who dominated everybody around him (including the likes of John Houseman and Joseph Cotten), so does McKay dominate the film, capturing not only Welles’ look, but his voice, his imperious manner, his charisma.

It’s a bravura performance, delicious and sly and funny and volcanic, and it lifts a modest film into a grandly entertaining one.

Linklater found McKay when the actor portrayed Welles in an obscure play called “Rosebud: the Lives of Orson Welles” in a small New York theater. I don’t know how the actor will fare in awards season; some smart people have speculated that the film, which opens on November 25, may not be seen by enough voters to make him a contender in the supporting actor category. I think that if it gets out there, the word-of-mouth could be enough to attract actors-branch voters – and if voters see it, McKay could be undeniable.

Set during the week in 1937 when Welles’ Mercury Theater Company launched a groundbreaking, militaristic production of “Julius Caesar” that revolutionized Broadway and sealed Mercury’s reputation as theatrical pioneers, the film also stars Claire Danes, Ben Chaplin, Zoe Kazan and Zac Efron as the “me” of the title, a 17-year-old high school student who becomes a part of the production.

Technically, Efron’s character (who really existed, though in truth he was only 15) is the center of the film; that makes McKay’s performance a supporting one, albeit a supporting one around which the movie revolves.

If you’re trying to catch up with all the Oscar contenders, or if you just want to be knocked out by an unknown actor grabbing hold of a formidable role, you ought to see it. And if you’re in the actors branch of the Academy – please, you need to see it.

The film shows at 8:00 tonight at the Arclight Sherman Oaks. Afterwards, theWrap’s Sharon Waxman will moderate a Q&A session with Linklater and McKay.

You can RSVP here.