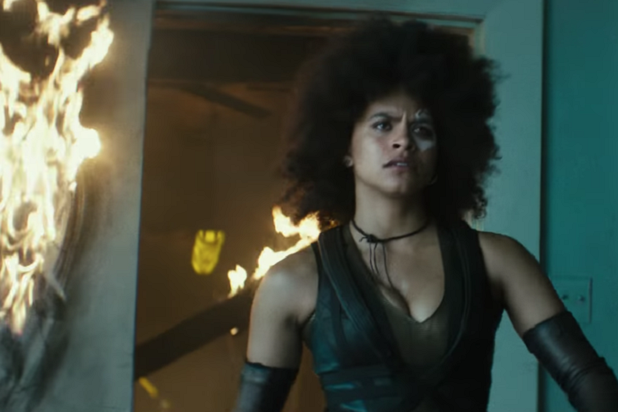 (Warning: Spoilers ahead for “Deadpool 2,” so for real, don’t read any further unless you just want to be spoiled.)

So you’ve finally seen “Deadpool 2” and are wondering what exactly is Domino’s superpower in the movie – besides stealing every scene she is in, of course.

Played by “Atlanta” star Zazie Beetz, the short answer is that Neena Thurman, AKA Domino is extremely lucky. And not just in a random, occasional, hey-wow-I-won-the-lottery way. But in an all-day-every-day-things-just-work-out-perfectly kind of lucky.

The long answer, as explained in the comics, is that Domino is a mutant whose power is subconscious, highly random telekinesis affecting things within her line of sight. In other words, her mind autonomically controls objects and space around her just like her heart keeps beating and her lungs keep delivering oxygen to her body.  This causes improbable (though not impossible) things to just sort of occur — things that benefit her, or things that hurt people trying to attack her.

In the film, this power comes in handy a lot, including one hilarious sequence when she and the rest of X-Force jump out of a helicopter in dangerously high winds. While the winds blow the rest of the team toward some particularly gruesome ends, they end up sending her exactly where she needed to be.

Created by Rob Liefeld, Domino first fully appeared in X-Force, vol. 1 #11 (June 1992). She’s also got longstanding ties to other characters from “Deadpool 2,” especially Cable. (You can read more about all that here.)

Beetz is best known as being the breakout star of FX’s “Atalanta,” and the only female lead on the show. She plays the on-again off-again girlfriend of Donald Glover’s character, Earn.