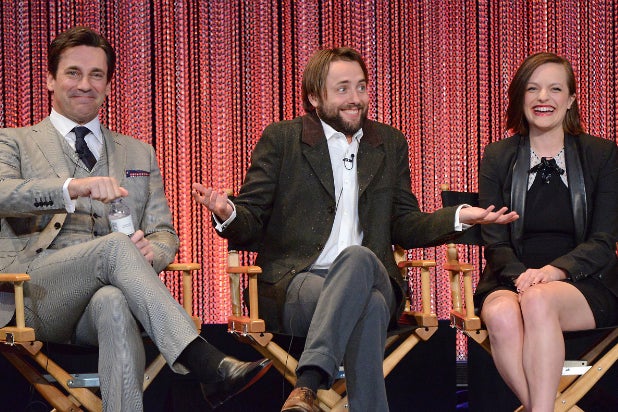 AMC’s “Mad Men” starts its seventh and final season April 13, and lead actor Jon Hamm is making amends at PaleyFest for some of the many, many, many wrongs his philandering alcoholic character, Don Draper, perpetrated over the course of the show.

In particular, Hamm had an apology for Kiernan Shipka — Sally Draper on “Mad Men,” who walked in on her father banging the neighbor’s wife in one of season six’s most shocking moments.

“Sorry about that!” Hamm said, to roars of laughter from the audience.

The “Mad Men” cast — including Vincent Kartheiser, Elisabeth Moss, Christina Hendricks, Robert Morse and Jessica Paré, in addition to Hamm and Shipka — appeared on stage at PaleyFest Friday to wrap up six seasons of the award-winning series and give fans a preview of the two-part seventh season.

The cast also shared how they’re holding up with the impending end of the show.

“It’s definitely starting to sink in that we’re going to have to say goodbye to not only this work and our characters, but, you know, sort of this family,” Moss said.

“Because I don’t plan on seeing any of these people ever again,” she joked.

Moss was able to keep the mood light, but for some of the other cast members, the end of “Mad Men” is going to be a tough hill to climb.

“I probably started being emotional earlier than everyone,” fan favorite Hendricks said. “I sort of think about it a lot, and it’s going to be hard for me. I’m already grieving… I’m just bracing myself.

“We’re in some phase of grief at this point; it’s probably denial,” Hamm said.

“Because we are collectively starting to realise that the end is coming faster than we thought it was, and there’s nothing to do to prepare for it. It just is,” he added.

For 14-year-old Shipka, it’s hard to remember what life was like without the show in her life.

“I’ve been on the show longer than I haven’t,” Shipka said. “It’s so weird to think about, but it’s true.”

The cast also addressed the wild fan conspiracy theories that abound each season about characters and storylines on the show — from Megan Draper being a victim Manson Family/Sharon Tate style mass murder to the myriad questions about Bob Benson’s background.

“As far as the show goes, I pay attention to the writing of our writers, because they generally know,” Paré said.

“But that said I haven’t — I don’t know what’s going to happen with the end of the season. So maybe it is, maybe we’re all dead, guys!”

“I think it just goes to show … the way the show doles out information and tells the story is very oblique sometimes, and when that is the case, I think people, if they’re invested in the show or invested in the characters, tend to start trying to fill in blanks,” Hamm said.

While the cast by and large dismissed internet rumors and theories, they did acknowledge that none of them knows how it all will end, so they’re along for the ride almost as much as the audience is.

The final season of “Mad Men” premieres on AMC Sunday, April 13 at 10 ET/9 CT. In the meantime, take a look at this “spinoff” trailer based on everyone’s favorite new character, Bob Benson, which came highly recommended by Mr. Draper himself on stage at PaleyFest: