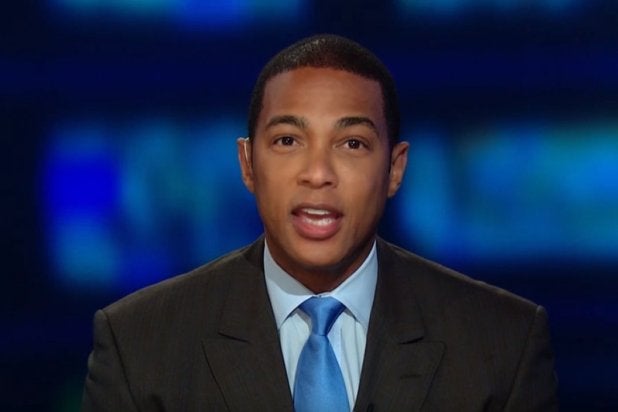 CNN’s Don Lemon interviewed Bill Cosby accuser Joan Tarshis in-studio on Tuesday night regarding her allegations that Cosby raped her twice when she was 19-years old; Lemon had initially spoken with her remotely on Monday night, one night after TheWrap’s interview with her.

“I was kind of stoned at the time, and quite honestly that didn’t even enter my mind,” Tarshis said of the notion of using her teeth. “Now, I wish it would have.”

It’s the type of comment often associated with the concept of “victim blaming” and Twitter wasted no time taking Lemon to task for his suggestion.

#DonLemonReporting started trending almost immediately, with users suggesting ridiculous things like “Why didn’t New Orleans move out of the way of Katrina?” and “The Native-Americans could have just refused to take those smallpox-infected blankets” to emphasize how inappropriate they felt Lemon’s statement was.

Representatives for CNN and Don Lemon did not immediately respond to TheWrap’s request for comment.

Below are some of the more outrageous tweets users came up with.

“Mr. President, did it ever occur to you to NOT drive with the top down that day in Dallas?” #DonLemonReporting — Bitter Script Reader (@BittrScrptReadr) November 19, 2014

I mean, couldn’t you just use a fire extinguisher to put the burning cross on your lawn out? #DonLemonReporting — Elon James White (@elonjames) November 19, 2014

If Africans didn’t want to be stolen and sold into slavery, they shouldn’t have been in Africa that day. #DonLemonReporting — L. Brothers Media (@LBrothersMedia) November 19, 2014

But did the towers make any attempt to avoid the planes? #DonLemonReporting — Dr. Feelfine (@ChristianLipski) November 19, 2014

“Yes, but the Hindenburg could have just turned left, did anyone think to turn left?” #DonLemonReporting — Oliver Willis (@owillis) November 19, 2014

Tank Man should’ve stepped to the side while politely requesting that the tanks “take a moment to reconsider.” #DonLemonReporting — Richard Hernandez (@richrdhernandez) November 19, 2014

If you wanted to get married in Texas did it ever occur to you to not be gay? #DonLemonReporting

If you didn’t want to be accused of being born in Kenya, why weren’t you born white, President Obama? #DonLemonReporting — Philip Moon (@Philip_R_Moon) November 19, 2014

There were ways to get over the Berlin Wall, ladders, for instance #DonLemonReporting