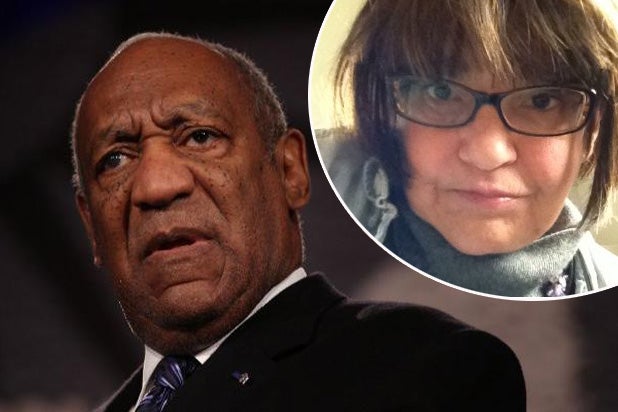 Former publicist Joan Tarshis came forward with claims that she had been drugged and raped twice by Bill Cosby in an article on the Hollywood Elsewhere website on Sunday.

Later Sunday evening, Tarshis told TheWrap that she decided to come forward “because of the breaking news, because of the other women who were courageous enough before me to venture out and say what was going on. I, too, thought nobody would believe me because of his image, you know, whiter than snow.”

Tarshis’ story is just the latest in a series of years-old sexual assault allegations against Cosby, which have resurfaced in the wake of alleged victim Barbara Bowman’s Washington Post essay last week.

While this is Tarshis’ first time speaking publicly about the alleged incident, she did open up to friends about 20 years after it happened, and even says she turned down a chance to tell her story to the National Enquirer years ago.

Tarshis decided to tell her story to friend Jeffrey Wells, who runs the Hollywood Elsewhere website, instead. “I know Jeff, and I said to him I really want to start the ball rolling on this,” she explained.

In her account, Tarshis alleges that she was introduced to Cosby through mutual friends while she was writing a monologue for comedian and actor Godfrey Cambridge. Cosby purportedly invited her up to his hotel room to work on a monologue for him, where he poured her a Bloody Mary topped with a beer, which he called a “redeye.” She was then allegedly drugged and raped in his hotel room, which was the same pattern she claims he used in a second assault.

“Every single person who he has allegedly raped has had the same exact pattern,” she said. “A business connection and then being drugged and then being accosted while they were unconscious. And it’s just so bizarre that that’s his M.O. And everybody was the same age. I was 19. From what I’ve read, everybody else was in their late teens — not 17, but 18 or 19.”

She continued, “And all through the years, before I mentioned it, before anything else came out, I knew I wasn’t the only person. That it wasn’t just me, that I was so exceptional that he couldn’t control. I knew that he was a serial rapist. I just knew he had to be, and I was right.”

While Tarshis doesn’t expect her admission to necessarily affect Cosby’s projects (currently NBC is developing a sitcom and Netflix plans to air a stand-up special on Thanksgiving) “because there’s money involved,” she’s hoping her story has some impact on his image.

“Just to help the public understand that he’s not Mr. Clean,” she explained. “All these years when I was watching him get these awards and watching him do Jell-O commercials with little kids, and all the times that I knew what he had done to me, and I just really want to set something straight in the public eye.”

Tarshis is well aware of both Hollywood business and what the public latches on to. From working in comedy, she transitioned into music publicity in the 1980s. Tarshis counts Ann Murray, Bob Marley, REO Speedwagon, Foreigner and the Red Hot Chili Peppers among the acts she has represented. She left publicity to become a journalist and she’s currently getting her Masters of Science in mental health counseling from Walden University.

Currently living in New York, Tarshis said it took her two decades to speak to anyone about the alleged incident because she blamed herself. “It still kind of feels that way, that I should have known better,” she said.

“And I know intellectually that’s incorrect, but that’s still a feeling that I have,” she continued. “And it surprises me, because you hear about all the women who are victims — who’ve been accosted and have been raped — feel like it’s their fault and they don’t tell people about it. And it’s just kind of surprising to me that I too feel that way.”

Another reason she held back her story for so long was more personal. As she didn’t open up right away about the alleged assault the first time with Cosby, Tarshis said that her mother was very excited when Cosby called up and invited her to attend a theater production shortly thereafter. Tarshis said that she couldn’t tell her parents what had happened the first time she met with Cosby, and so she went.

“I wasn’t as naive after the second time to go back again. I said this is it,” she recalled. “Just makes me feel ill. So, I kind of was trapped into going the second time because I was at my parents and I didn’t know how to get out of it.”

Tarshis said that she waited until now to come forward in part for them.

“They’re still alive, but they’re very old and this is not going to reach them,” Tarshis explained. “Most of their friends have passed away. My dad’s 94, my mother’s 92. So I waited … I really did not want my parents to know. I didn’t want to hurt them. I didn’t want to upset them. And they would have really, really been damaged by me telling them something, or finding out something like this.”

Tarshis wanted to also put out a message to other women: “Trust your gut.”

“If you have a funny feeling about somebody, go with your intuition, go with your instinct,” she continued. “When somebody invites somebody over to dinner, you don’t expect nor should you think that you’re going to be drugged by that person. And if you are, it wasn’t your fault. It was their fault. You’re not to blame. They are.”

Cosby, through his lawyer on Sunday, downplayed the previous allegations and indicated that he would not comment further. Cosby also refused to answer a question regarding the assault charges Saturday during an interview with National Public Radio.