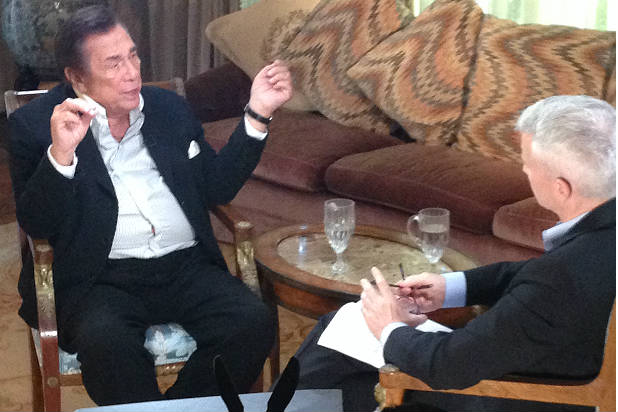 Donald Sterling’s so-called “apology” for his racist rant appears to have only gotten him in hotter water with the media. But the 80-year-old Los Angeles Clippers owner is still considered a gem by another class of social commentators: comedians.

“Oh, Donald Sterling, u do give 2 the community…[of] standup comedians,” Kathy Griffin tweeted in response to Sterling’s Anderson Cooper interview that aired Monday. “Thank you 4 ‘helping to feed & clothe’ my act.”

While media outlets Salon and Deadspin covered Sterling’s most recent verbal assault on “holy” Magic Johnson  by pointing out the obvious damage Sterling had done to his already tarnished reputation, comedians did what they do best and cracked the best jokes they could fit into 140 characters or less on Twitter.

Perhaps Donald Sterling is right.I hear Magic Johnson often sleeps for up to 8 hours.I guess during those hours minorities are on their own.

Donald Sterling claims Anderson Cooper set him up, and that he didn’t know their conversation was being televised.

Oh #sterling #DonaldSterling #DonSterling. U DO give 2 the community… f standup comedians. Thank you 4 “helping to feed & clothe” my act.

Shelly Sterling says she’s “going to eventually” divorce Donald Sterling in the same way I say I’ll eventually get to watching The Wire.

I’m hosting the @MusiCares concert tonight, replacing Donald Sterling, who backed out when he learned of @Metallica ‘s “Black Album.”

To Donald Sterling: As a member of humanity please don’t talk anymore.

I believe Donald Sterling was baited into making those comments because one time my wife said “Hello” to me & I said the N word 15 times.

But there was one person who wasn’t laughing:

I’d rather be talking about these great NBA Playoffs than Donald Sterling’s interview.

After this week, no more Sterling talk. Just the NBA Playoffs, my @Dodgers and my @LA_Sparks!