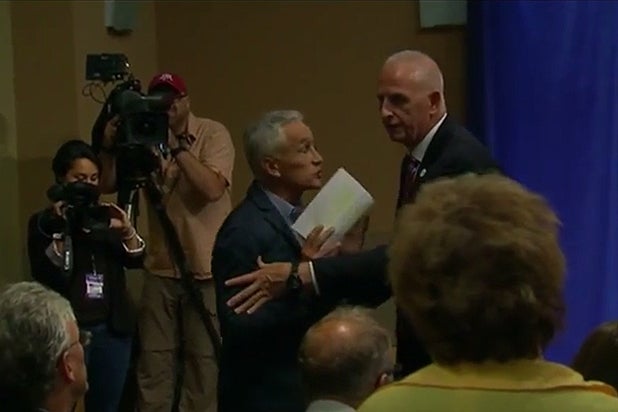 Donald Trump slammed Univision’s Jorge Ramos on Wednesday, calling out the popular Mexican-American anchor for “ranting and raving” at an Iowa press conference while trying to ask Trump a question about deporting illegal immigrants.

“I would have gotten to him very quickly,” Trump said to Matt Lauer on “Today.” “This man gets up and starts ranting and raving and screaming, and honestly being very disrespectful to all the other reporters.”

Ramos began criticizing Trump’s plan before Trump fired back: “Sit down… you weren’t called. Go back to Univision.”

Trump’s security official escorted Trump out of the press conference before the Univision anchor was brought back in to ask his question. Fireworks ensued as the two men got into a contentious exchange about the label “illegal” immigrant and the feasibility of the real estate mogul’s deportation plan.

Ramos has been making the media rounds on Wednesday. “The one that is out of line is Donald Trump,” he shot back on CNN’s “New Day.”

“It is extreme what he is saying about immigrants in this country…as journalists, are we supposed sit-down because he says so? This is not his country, this is our country.”

The Univision anchor concluded that Trump knows he made a mistake because he invited him back in the press conference and that the only way to settle the score was for Trump to grant him an interview.