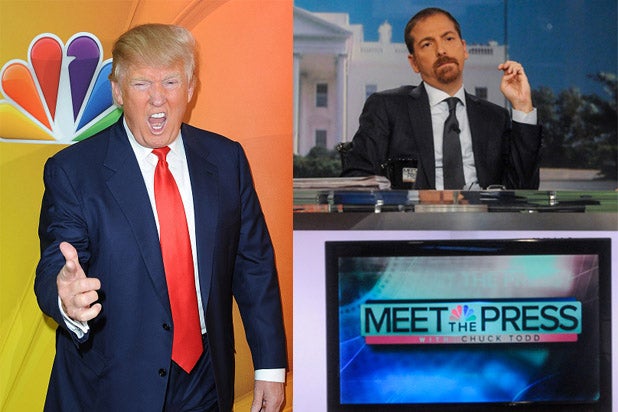 “Celebrity Apprentice” host Donald Trump is known for picking battles with high-profile media figures, and the latest subject of his ire is “Meet the Press” host Chuck Todd.

Following up on tweets from Sunday claiming “word is that NBC News is firing sleepy eyes Chuck Todd,” Trump was back at it Tuesday, bragging that people — though inquiring minds want to know who — are begging him to replace Todd.

So many people have told me that I should host Meet the Press and replace the moron who is on now. Just too busy, especially next 10 years!

I am convinced that sleepy eyes Chuck Todd was only a placeholder for someone else at Meet the Press. He bombed, franchise in ruins! @nbc

Trump’s numbers are a little off — as TheWrap previously reported, Todd had his best “Meet the Press” performance on January 18th. The program saw its highest ratings in ten months dating back to when David Gregory was still moderator.

Trump started blasting Todd on Twitter after the NBC host slighted him on this past Sunday’s show.

Also Read: Kate Gosselin Blasts ‘Celebrity Apprentice’ Firing: ‘It Should Have Been Kenya’

“Nobody’s going to mistake Donald Trump for a presidential candidate, I don’t think, other than Donald Trump,” Todd said in reaction to Trump’s speech at the Iowa Freedom Summit in Des Moines.

NBC News has not yet responded to TheWrap’s request for comment regarding Trump’s comments.