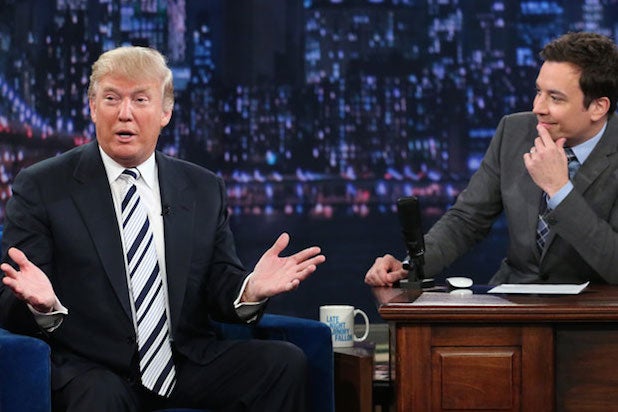 Politicians looking to break through the noise of cable news and social media are increasingly relying on an old, yet effective weapon: late-night television.

New Jersey Gov. Chris Christie, a Trump rival, has appeared with Jimmy Fallon on “The Tonight Show” three times in the last six months alone — including on Monday.

Even Democratic frontrunner Hillary Clinton is hitting the talk-show circuit this month, heading to Ellen DeGeneres‘ couch on Sept. 10.

The main reason for this early push into mainstream entertainment is Donald Trump. Thanks to his years as a TV personality and his recent headline-grabbing remarks, Trump has attracted media attention in a way that few politicians can hope to match — particularly in the crowded field of Republican presidential candidates.

“Because he’s had such a commanding lead, he’s been putting the pressure on all the other candidates to stay more relevant,” crisis manager Ryan McCormick, co-founder of Goldman McCormick Public Relations, told TheWrap. “If Trump had not been in the race, I don’t believe the candidates would be out pushing themselves so hard for exposure.”

While candidates relied on news outlets to reach voters in prior election cycles — with only the occasional late-night appearance — these days they’re forced to dive into mainstream TV to stay competitive.

“He’s changed the game,” Omarosa Manigault, former “Apprentice” contestant, told TheWrap last month. “Trump gets the tabloids, he gets People magazine, he gets Politico and The Hill. He gets all this press across the media and [other candidates] don’t know how to deal with him.”

Late night’s social-media muscle and the likability of its popular hosts, insiders say, is one of the best tools to cut through all the Trump coverage.

“Social media is more important than ever,” Dave Berg, a former co-producer of the “The Tonight Show with Jay Leno,” told TheWrap. “When you appear on late night, it goes viral.”

Already late-night TV is looking more like “Meet the Press” than variety programming. Trump himself will guest on Jimmy Fallon‘s “Tonight Show” on Sept. 11 — his first appearance on the show since NBC cut ties with the former “Celebrity Apprentice” host.

Experts say you can expect most candidates to make a late-night appearance in the coming months because it offers candidates what no other medium can: the opportunity to display their human side and appeal to younger voters.

“Every one of these candidates are really smart and most of them have a funny bone too,” said Berg, who literally wrote the book on late night TV, “Behind the Curtain.” “Late night gives them a chance to show that, ‘Hey I’m really a three-dimensional person!’ What other platform can do that?”

According to George Mason University’s Center for Media and Public Affairs, 2008 presidential candidates made 110 appearances on late-night shows, up from 25 in 2004. The number dropped in 2012, in part because only the Republicans had a contested primary.

And a 2012 Pew Research Center survey found that more Americans turned to “Saturday Night Live,” “The Daily Show” and “The Tonight Show” than to national newspapers for campaign news.

The appearance became such a water-cooler topic that it marked the beginning of an unexpected turnaround for Clinton’s campaign. Over the next few weeks, he would find the energy and momentum to win the presidency.

“If you go back to that election cycle, Bill Clinton was a nobody,” Berg said. “Bush was a shoo-in. Democrats were just running [Clinton] because they had to run somebody.”

Since then, an appearance on late night has become a right of passage for those vying for high office.

The power of the late-night platform is such that candidates have mounted it even at the most important moments of their campaigns. In 2003, Arnold Schwarzenegger used the “Tonight Show” to announce he would seek the Republican nomination for governor of California.

A few weeks later, John Edwards declared himself a candidate for president on “The Daily Show.” And Arizona Senator John McCain went on the “Late Show With David Letterman” in 2007 to announce his own presidential bid.

While late night TV won’t be doing away with celebrity interviews — its bread and butter for years — it’s the politicians, experts say, who bring the most buzz.

“Hollywood celebrities aren’t necessarily a ratings guarantee,” Berg said. “But when you bring on a presidential candidate it gets people talking about it the next day.”