New York Times reporter and author Maggie Haberman has provided photo evidence to support her previous claim that Donald Trump would flush handwritten presidential documents down the White House toilet and frequently clog the pipes in the process.

The photos, which are embedded below, show documents reportedly written by Trump himself that are ripped apart and sitting in the bottom of a toilet. Haberman – whose book on the Trump White House, “Confidence Man,” is due in October – reports that the photo on the left is from a bathroom in the White House, while the photo on the right is from an overseas trip, according to Axios, which exclusively published the photos Monday.

“It was an extension of Trump’s term-long habit of ripping up documents that were supposed to be preserved under the Presidential Records Act,” Haberman told the outlet.

Haberman’s reporting about the flushed documents first surfaced in February, and Trump was quick to deny the claim.

“Yeah, it’s fake news and she’s a fake writer,” he told Fox News of the Pulitzer Prize-winning journalist. “It’s a totally false story. She made it up,” he continued. “I don’t believe they have sources. Who is going to be a source for that anyway? Who would know that? There is no source. They make it up.”

The revelation, of course, made its way around both morning shows and late-night comedy monologues at the time. “The View” co-host Ana Navarro criticized the hypocrisy of Trump and the Republican party for fixating on Hilary Clinton’s emails, while Trump was allegedly doing this. “I mean, I knew they were full of crap, but I didn’t realize it went this far,” she joked. 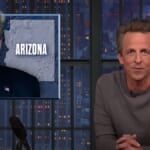