Midterm elections are in full swing, and twice-impeached former President Donald Trump has been vocal in them, endorsing candidates and his 2020 election lies about voter fraud. Many have dubbed it Trump’s “revenge tour” as he gears up to announce another run for president in 2024. Seth Meyers, for one, roasted the life out of that terminology.

During his “A Closer Look” segment on Thursday night, Meyers began by mocking Trump’s particular interest in Arizona as “a revenge state.”

“I’m sorry, Arizona is a revenge state for him? What’s he gonna do, make us live there? ‘Oh sure, it’s sunny and beautiful, but just try to order a pizza after 9 p.m. Speaking of sun, make sure to find a dermatologist you really like because you’re gonna see her more than you see your own family.'”

The late-night host then circled back to mocking the idea of a “revenge tour” at large. “You lost an election, stop acting like Liam Neeson threatening to get his daughter back,” he joked. 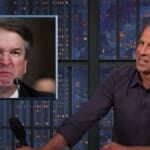 At that, Meyers then imitated exactly how he thought it would sound if Trump were the star of “Taken” instead of Neeson.

“‘I have a very particular set of skills. I can shank a golf ball 90 yards, I can drink three Diet Cokes in one sitting, and that’s in. So in the end, it’s just the two skills, and as I say ‘em out loud, I’m not sure how either is gonna help me get my daughter back,'” he said in his best Trump voice.

But Meyers wasn’t anywhere near done mocking the idea.

“Seriously, why does Donald Trump have a revenge state? Is this the first time a former president has gone on a ‘revenge tour’ after leaving office?” Meyers wondered. “Like, usually, ex-presidents retire to a quiet life of paid speaking gigs and celebrity golf tournaments. I don’t remember William Howard Taft going from town to town looking for anyone who didn’t vote for him in 1912 so he could kick them in the d—.” 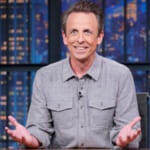 Also Read:
Submit Your Questions for Seth Meyers in TheWrap’s AMA, and He Might Answer Them on Camera