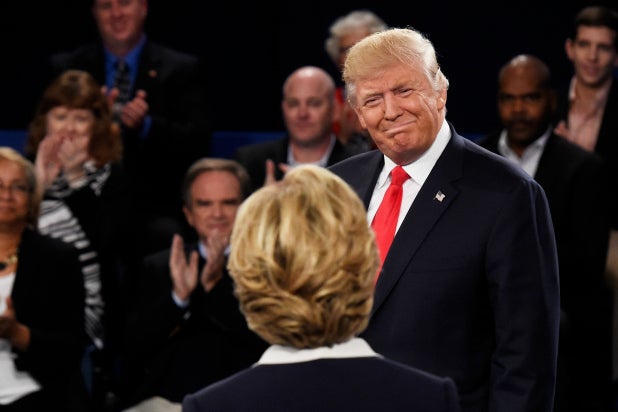 With a huge “Sunday Night Football” game on NBC, it is unlikely that Nielsen’s TV ratings will follow suit, record-wise. Trump-Clinton Debate 1 nabbed a massive 84 million total viewers, smashing the longstanding high-water mark there, which was set by Reagan.

Unsurprisingly, Trump talk dominated the Twitter conversation, with 64 percent of the tweets focusing on the GOP nominee. However, Clinton added 25,000 followers last night to Trump’s 16,000.

There, the most-tweeted-about policies were terrorism, foreign affairs, the economy, healthcare and guns, though Trump’s treatment of women was more discussed than any of those.

The Top 3 most-tweeted moments were:

Also Read: How Many Times Did Donald Trump Sniffle In the Second Presidential Debate?

On Facebook, Trump actually accounted for 74 percent on the discussion. Below are the top moments and topics on that giant social-media platform.