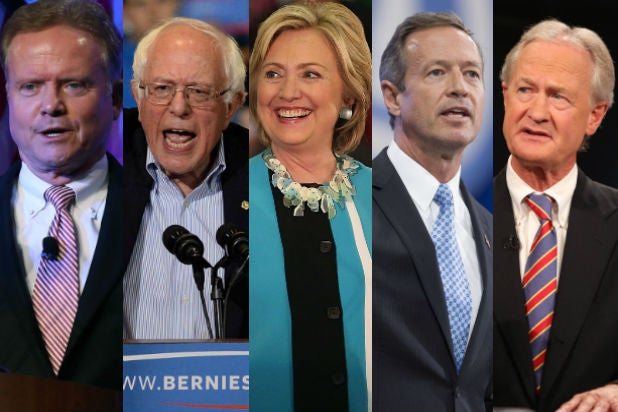 While Republicans have duked it out in two record-breaking televised presidential debates, Tuesday will mark the first chance voters have to see their Democratic equivalents go head to head in their first debate, moderated by CNN’s Anderson Cooper in Las Vegas.

“The question is: Do candidates go negative and throw some punches at Hillary Clinton? And how does she respond to that?” Democratic strategist Dave Jacobson told TheWrap. “Does she take them on and respond directly or does she pivot away from even acknowledging them and focus on other issues?”

TheWrap spoke to several political strategists to see what viewers can expect and what candidates need to do to stay in .

1. Will viewers feel the Bern?
Bernie Sanders has been the only Democratic candidate to come close to Clinton in the polls. The Vermont senator has been packing stadiums and become a fundraising phenomenon. In the last quarter, Sanders brought in nearly as much money as Clinton — without the help of a super-PAC. But while Clinton enjoys great name recognition, many voters are still unfamiliar with Sanders and his policies.

“He hasn’t necessarily translated the support beyond Iowa and New Hampshire,” said Jacobson. “The question will be: Can Sanders catapult his campaign to a national level? Can he mirror what Carly Fiorina did during the debates?”

2. How will Clinton handle questions about her use of a private email server as Secretary of State?
The issue has dogged her campaign for months and is likely to come up on Tuesday night. Not to mention she’s scheduled to testify before a Benghazi panel on Oct. 22.

“Hillary will be perfectly able to handle those questions,” Los Angeles-based Democratic strategist Bill Carrick told TheWrap. “But it could be a little more dicey for the other candidates. They obviously want to take advantage of the situation, but they also don’t want to look like they’re piling on. They have to be very careful about how they handle that.”

Also Read: CNN's Debate Criteria Will Allow Joe Biden to Jump In on Day of Event

3. The authenticity factor
Much has been written about Hillary Clinton’s perceived trust issues among likely voters. A new Quinnipiac poll shows she may have a lot more work to do in that department.

“Hillary’s No. 1 problem is to look authentic,” Jack Pitney, professor of government at California’s Claremont McKenna College, told TheWrap. “The problem is, the harder you try to look authentic, the less authentic you look. Clinton should stick to issues and topics she’s actually comfortable discussing. Things like foreign policy will allow her to show her stuff.”

4. Will it be a snoozefest?
The Republican debates clocked record ratings. Fox drew an eye-popping 24 million viewers in August while 23 million watched the CNN debate last month. But the GOP field had one thing Dems don’t: Donald Trump. How will this debate compare to the previous two?

“Trump’s over-the-top rhetoric sent shockwaves across the country,” said Jacobson. “He’s electrified voters and gotten them to tune in much earlier than they would have otherwise. But I don’t think it’s going to be boring. Clinton’s ever-evolving email scandal and Bernie Sanders’ soar in the polls combined with the 800-pound gorilla in the room in the form of a looming Joe Biden presidential run will lead to substantial viewership.”

5. Can the lower-tier candidates make enough of an impact?
Joining the debate alongside poll leaders like Clinton and Sanders are three candidates who barely register in national polls: former Rhode Island Gov. Lincoln Chafee, former Virginia Sen. Jim Webb and former Maryland Gov. Martin O’Malley. For them, the debate could be a make-or-break moment.

“It’s hard to see how they can really break out,” said Pitney. “It’s an opportunity for them to reach a larger audience, but it kind of reminds me of the episodes of ‘Star Trek’ where Kirk, Spock and an unnamed actor previously unseen beam down to a planet and you know who’s going to get eaten by the monster.”

6. Donald Trump
The GOP frontrunner has dominated the polls and news cycle since launching his campaign in June. How do candidates deal with the Trump effect?

“I have no doubt in my mind that he will be part of the conversation, not just once but many times during the debate,” said Jacobson. “Democrats should obviously draw a line in the sand on where they differ from him and his gut-wrenching comments.”

7. Last but not least, Joe Biden
The Vice President is expected to make a decision on his own White House run in the coming days. If he doesn’t make an announcement one way or another, he likely won’t be a factor during the debate, but if he does, his name is likely to come up. Biden is enjoying an incredible burst of popularity right now and candidates should tread carefully when addressing his looming candidacy.

“Every candidate on that stage aught to walk in there with the presumption that Biden is not a candidate,” said Carrick. “They want to treat Joe Biden as if they’re trying to get his support, not trying to run against him. Until he runs, they have to be very, very, very praising of Biden and say nice things about him.”