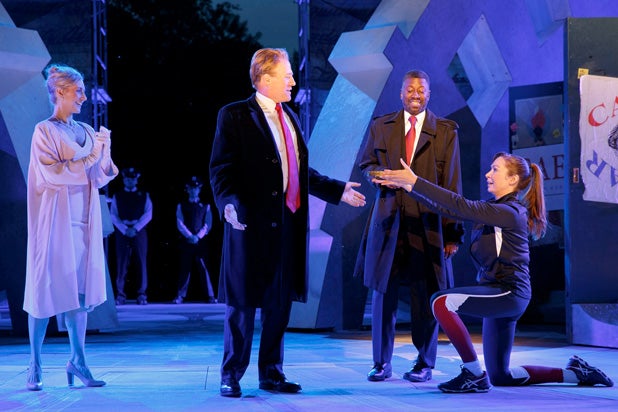 Donald Trump’s charitable foundation once donated to the Shakespeare festival now under fire for staging a production of “Julius Caesar” depicting the title character as a very Trump-like politician.

According to Washington Post reporter David Fahrenthold, who won the 2017 Pulitzer Prize for National Reporting for his reporting on Trump’s charity during the 2016 election, the first donation made by the Trump Foundation was to the Public Theater’s New York Shakespeare Festival in 1987.

The very first donation @realDonaldTrump made from his Trump Fdn, in 1987, was to @PublicTheaterNY Shakespeare fest. pic.twitter.com/RGnhWJijVn

30 years later, the Public Theater is losing sponsorships because of a production appearing to depict the assassination of the president.

Both Delta Airlines and Bank of America have announced that they will pull their sponsorship of the show, directed by Public Theater artistic director Oskar Eustis, due to its subject matter.

After Donald Trump Jr. wondered on Twitter whether or not the production was being funded by taxpayers, the National Endowment for the Arts clarified in a statement that no tax dollars were spent on the nonprofit theater’s Shakespeare in the Park production this year.

The production stars Gregg Henry as the title character, rendered as a stand-in for the president, complete with blond hair, an overlong necktie and a tendency toward verbal bluster. The assassination of Caesar — foretold by a soothsayer wearing an Anonymous-style Guy Fawkes mask — is a bloody climax of the production with lots of stage blood deployed.