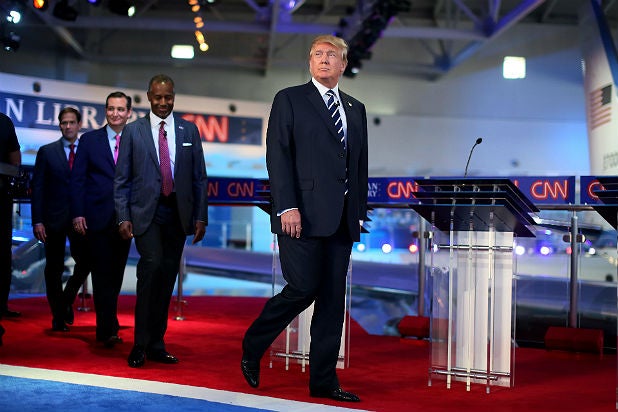 The highly-anticipated second Republican presidential debate on CNN is underway and there’s plenty of storylines revolving around Donald Trump, Jeb Bush and nine other candidates debating at the Reagan Library in Simi Valley, California.

This debate will be close to three hours long, an hour longer than the first GOP debate on Fox News in August.

Stay with TheWrap for a mix of the best sound bites and moments as they happen live.

Candidates open with 30-second-opening statements
Mike Huckabee opens with a subtle dig at Democratic candidates Bernie Sanders and Hillary Clinton. Marco Rubio makes a California drought joke that falls flat. Trump opens up by saying he wrote the “Art of the Deal” and says — “not in a braggadocios way”– that he’s made billions and billions of dollars. Jeb Bush opens by recounting his record as Florida Governor; he did not attack Trump or other candidates. Carly Florina told the story of her rise from secretary to CEO.

Donald Trump opens by bashing Rand Paul, Scott Walker
The GOP frontrunner opens by saying Senator Rand Paul is at 1 percent in the polls and doesn’t belong on the stage, drawing noticeable groans from the crowd. Paul hit back saying Trump’s “sophomoric” attacks are like Junior High School.

Scott Walker jumped into the fray, saying America doesn’t need an “apprentice” in the White House — a dig at Trump’s former gig as host of “The Apprentice.”

Carly Fiorina pressed on Trump
Fiorina calls Donald Trump a “wonderful entertainer,” saying: “All of us will be revealed over time.” When moderator Jake Tapper pressed Fiorina on whether Trump should be trusted with his hands on the nuclear button, she declined, saying that’s up to the voters. Bush declined to answer also.

Bush comes out swinging against Trump
“He supports [Nancy] Pelosi, he supports Clinton, he supports Schumer,” Bush said about the real estate mogul. Trump countered with his usual line about getting along with everyone as a businessman. The two then got into an exchange about whether Trump tried to secure a casino grant in Florida when Bush was governor –Trump denied doing so.

Also Read: Donald Trump Deletes Tweet About Jeb Bush's Wife: You Like 'Mexican Illegals' Because of Your Wife

Huckabee gets first question 25 minutes in
Tapper got to former Arkansas Governor Mike Huckabee a half-hour into the debate about his support of Kim Davis, the Kentucky County Clerk who refused to authorize same sex marriage licenses. Huckabee decided not to answer and chimed in on the Iranian nuclear deal question. He also said he’d rip up the deal as president.

Carly Fiorina gets loud applause after responding to Donald Trump’s “Look at her face” attack
Tapper asked Fiorina what she thinks of Donald Trump’s attack at her face. She responded: “I think women all over this country heard very clearly what Mr. Trump said.” The comment earned Fiorina a thunderous applause.

Trump countered that she has “a beautiful face” and is a beautiful person.

When asked about whether Trump crossed the line by invoking his wife’s Mexican-American heritage in a negative light, Bush pointed to her in the crowd and asked the Donald if he’d like to apologize.

Trump, who told Jimmy Fallon there might come a time in the future he will apologize for something, declined to do so, saying he said nothing wrong.

“They can careless about your careers, they care about theirs,” Christie said about struggling American workers not needing to hear monologues on Trump or Fiorina’s track records as CEOs.

In a continuation of the Trump/Bush battle, the GOP frontrunner slammed George W. Bush for giving America Barack Obama, saying the last few months of his administration was a disaster. Jeb defended his brother saying he kept the country safe.

A large chunk of social media users disagreed, showing images of 9/11, which happened in the first year of Bush’s administration.