Former President Donald Trump has found a new way to cope with being banned by all major social media platforms: by launching his own media company, which will include a social media component unironically called “Truth Social.”

In a characteristically self-absorbed press statement announcing the company, Trump complained that “we live in a world where the Taliban has a huge presence on Twitter, yet your favorite American President has been silenced,” and said the company will be “a rival to the liberal media consortium.”

The company will be created by a proposed merger between “Trump Media & Technology Group” and a company called Digital World Acquisition Corp., which is listed on NASDAQ, the statement said.

According to the New York Times, Digital World Acquisition Corp. was incorporated in Miami, Fla., in December 2020 — a month after Trump lost the election. The company, owned by CEO Patrick F. Orlando, filed for initial public offering at some point last spring, and in September raised approximately $282 million, according to an SEC filing, from that IPO. An additional $11 million was raised from selling to private investors. The company is backed by several big hedge funds that own significant percentages. 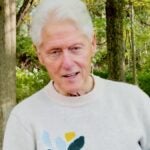 Also Read:
Bill Clinton on the ‘Road to Recovery’ After Health Scare in California (Video)

In addition to the, ahem, recentness of Digital World, there are also murky ties to Brazilian politics as well. According to the New York Times, Digital World’s CFO is Luis Orleans-Braganza, a right-wing royalist and member of Brazil’s national legislature as part of the conservative PSL party. Notably, that’s the party Brazil’s president Jair Bolsonaro was a member of before forming his current far-right Alliance for Brazil.

Whatever else happens, if a merger between Digital World and “Trump Media & Technology Group” is approved, the newly formed media company will have close to $300 million to play with, in addition to whatever the company is valued at. They might, however, want to spend that money on competent IT people. (Assuming, of course, that the money isn’t just funneled to Trump’s outstanding debts instead.)

Trump said in his statement: “I created TRUTH Social and TMTG to stand up to the tyranny of Big Tech. We live in a world where the Taliban has a huge presence on Twitter, yet your favorite American President has been silenced. This is unacceptable. I am excited to send out my first TRUTH on TRUTH Social very soon. TMTG was founded with a mission to give a voice to all. I’m excited to soon begin sharing my thoughts on TRUTH Social and to fight back against Big Tech. Everyone asks me why doesn’t someone stand up to Big Tech? Well, we will be soon!”

As always, it must be repeated that Trump has been booted from all major social media apps for his repeated lies about the 2020 election and his role in fomenting a sedition mob that attempted to overthrow the government in January.