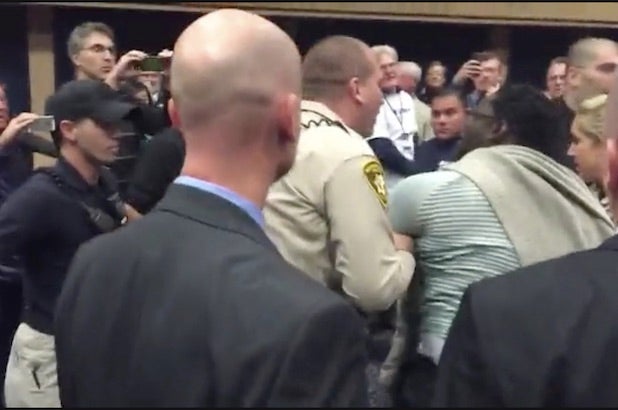 A Donald Trump rally turned ugly on Monday in Las Vegas as supporters of the GOP frontrunner screamed a Nazi salute and death threats at Black Lives Matter supporters removed from the event.

BuzzFeed political reporter McKay Coppins tweeted video, in which you can hear the violent comments from supporters as protesters are removed.

One Trump supporter chanted the Nazi salute, “Sieg Heil!” according to NBC News. “Shoot him” and “bitch” were also screamed while Black Lives Matter members were dragged out of the event.

As one protester screamed about the First Amendment amid security guards attempting to pull him out of the event, one Trump supporter screamed, “Light that motherf–ker on fire.”

Coppins reported activists interrupted Trump at least half a dozen times at the rally, sparking a “crazed” scene among the crowd of supporters.