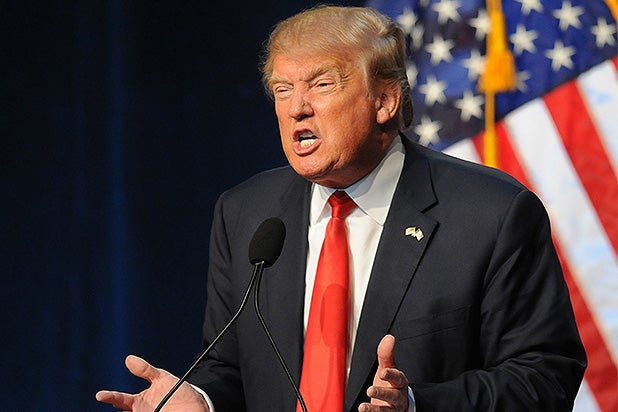 Donald Trump is threatening to boycott CNBC’s upcoming Republican presidential debate unless the network capitulates to his demands.

“The @GOP should not agree to the ridiculous debate terms that @CNBC is asking unless there is a major benefit to the party,” the candidate wrote on Twitter Thursday.

Trump’s main issue with the Oct. 28 debate is its running length, which according to the real estate mogul is “so much longer than the just-aired and very boring #DemDebate.” Trump went on to accuse the network of setting the longer running time in order to sell more commercials.

In a letter sent to CNBC’s Washington Bureau Chief Matthew Curry signed by both Trump and Ben Carson, the candidates made it clear that they wouldn’t participate if their conditions were not met.

“Neither Mr. Trump or Dr. Carson will participate in your debate if it is longer than 120 minutes including commercials and does not include opening and closing statements,” the letter, obtained exclusively by NBC News and signed by both candidates, reads.

The New York Times previously reported that Trump would not agree to the debate criteria, specifically taking issue with the length.

“The criteria that was outlined by CNBC was never discussed with any of the candidates or the campaigns,” Trump’s campaign manager Corey Lewandowski told the paper. “So what CNBC did was send out a memo and said, ‘Here’s the criteria as you have approved them and that went out to all the campaigns.’ We said we never agreed to this criteria.”

“Until we have this criteria specifically laid out,” Lewandowski added, “it is difficult to participate.”

The @GOP should not agree to the ridiculous debate terms that @CNBC is asking unless there is a major benefit to the party.

.@CNBC is pushing the @GOP around by asking for extra time (and no criteria) in order to sell more commercials. — Donald J. Trump (@realDonaldTrump) October 15, 2015

Why is the @GOP being asked to do a debate that is so much longer than the just-aired and very boring #DemDebate? — Donald J. Trump (@realDonaldTrump) October 15, 2015