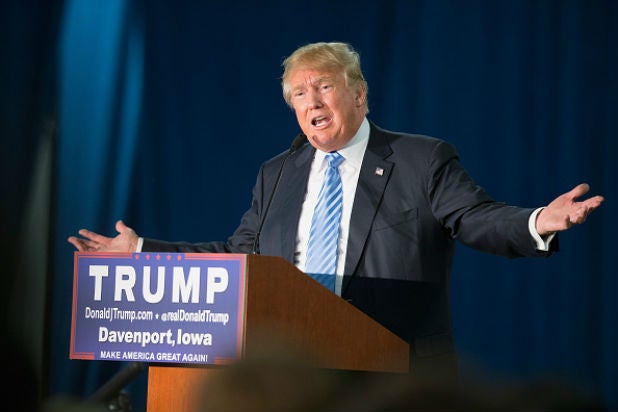 Republican Presidential candidate Donald Trump is calling for “a total and complete shutdown” of Muslims entering the United States, until lawmakers “can figure out what is going on.”

In a statement posted on his campaign website Monday, Trump laid out his proposal for “preventing Muslim immigration.” He wrote, “According to Pew Research, among others, there is great hatred towards Americans by large segments of the Muslim population.”

The GOP frontrunner also cited a poll from the Center for Security Policy, a conservative think tank, which stated, “25% of those polled agreed that violence against Americans here in the United States is justified as a part of the global jihad.”

“Without looking at the various polling data, it is obvious to anybody the hatred is beyond comprehension,” Trump said in his statement. “Where this hatred comes from and why we will have to determine. Until we are able to determine and understand this problem and the dangerous threat it poses, our country cannot be the victims of horrendous attacks by people that believe only in Jihad, and have no sense of reason or respect for human life.”

Trump then tweeted a link to his statement. And several presidential candidates immediately denounced the plan.

Fellow GOP contender Marco Rubio wrote on Twitter: “I disagree with Donald Trump’s latest proposal. His habit of making offensive and outlandish statements will not bring Americans together.”

“Donald Trump is unhinged. His ‘policy’ proposals are not serious,” Jeb Bush tweeted.

Democrat Bernie Sanders also blasted Trump, tweeting, “The U.S. is a strong nation when we stand together. We are weak when we allow racism and xenophobia to divide us. cc: @realDonaldTrump.”

And Democratic frontrunner Hillary Clinton Tweeted, “This is reprehensible, prejudiced and divisive. @RealDonaldTrump, you don’t get it. This makes us less safe.”

Trump’s statement comes on the heels of a mass shooting in San Bernardino, California, in which a Muslim man and his wife killed 14 people and injured 21 others in what is being described by authorities as an “act of terrorism.”