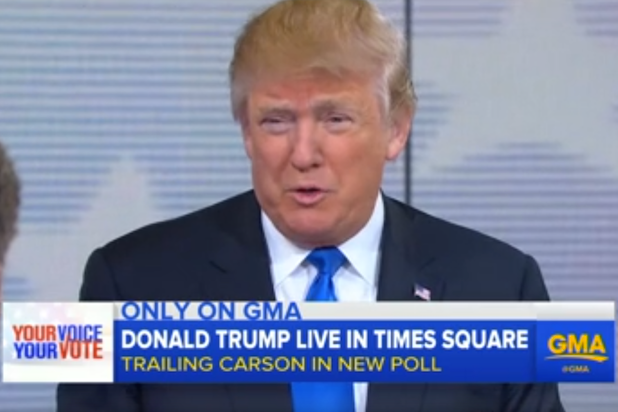 Donald Trump wants to get paid for his appearances in future GOP debates. The money, he says, will go to charities helping wounded military personnel and veterans.

The real estate mogul detailed his demands to ABC News’ George Stephanopoulos on Tuesday, only hours after announcing he intends to individually negotiate his own terms going forward with the debates, and would not sign a letter drafted by fellow GOP candidates outlining a list of their demands.

“I personally don’t care too much in terms of the debate; they’ve been hitting me one way or another. I guess I have been doing very well. I just want to have the debates. I like the debates,” Trump said, adding, “The networks are making a fortune with the debate. I’d like to see the wounded warriors and the veterans get some of the profits. I mean, we’re going in, we’re getting nothing, and that’s fine. But [the networks] are getting tremendous … 23, 24 million people.”

Also Read: Donald Trump to Negotiate GOP Debate Terms on His Own

Trump was also asked whether he would also insist on Republican moderators at the debates, something the other candidates have demanded. He said, “I just want to answer the questions and be done with it. Frankly we’re doing well.”

Stephanopoulos also showed Trump a video of President Obama mocking GOP candidates for saying they would be tough on Putin while complaining about a “bunch of CNBC moderators.”

“He can’t handle the country,” Trump said of the President. “He’s doing a terrible job running the country.”

Asked what he thought of Ben Carson, Trump acknowledged, “It’s going to be probably, maybe tight,” adding the retired neurosurgeon didn’t “have the experience” needed for the job.