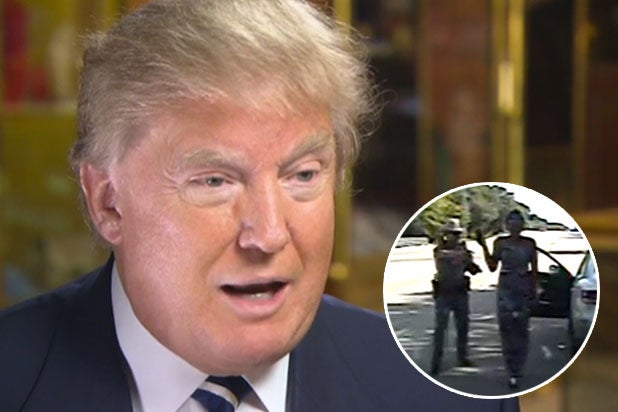 Republican presidential contender Donald Trump is weighing in on the death of Sandra Bland, the Texas woman who died while in police custody after a traffic stop.

In an interview with CNN’s Anderson Cooper on Wednesday, Trump blasted the officer who arrested Bland, calling him “terrible” and “overly aggressive.”

“I thought he was so aggressive,” the real estate mogul said. “It was a traffic signal, as I understand it. And, you know, who gets out of a car for a traffic signal?” adding, “He just looked very aggressive.”

Bland was found hanging in her jail cell three days after she was stopped by police and arrested on July 10. After her death caught national attention, the Texas Department of Public Safety released the dashcam video of her arrest on Tuesday, July 21.

The footage was immediately called into question for containing irregularities, including footage pausing and looping. Although Texas officials insisted that it was unedited.

Trump took issue with the officer’s conduct in the video.

“I didn’t like his demeanor,” Trump told Cooper. “I thought it was terrible to be honest with you. I’m a huge fan of the police. I think the police have to be given back power. But this guy was overly aggressive. Terribly aggressive.”

Also Read: Donald Trump 'Is Like a Navy SEAL,' According to Fox News Host (Video)

“Do you think that happens to African-Americans more than it does to you or I?” asked Cooper.

“The answer is it possibly does. It shouldn’t, and it’s very sad if the case is. I will say though, in this case I watched that so closely. I watched it a few times. He was terrible.”

The Harris County Institute of Forensic Sciences in Houston ruled Bland’s death a suicide. But her family and supporters question that finding, saying she was not clinically diagnosed with depression and was “ecstatic” about starting a new job at her alma mater in Texas. Waller County authorities have asked for further investigation from the FBI and Texas Rangers.

On Wednesday afternoon, Texas officials released a new, glitch-free version of a dashcam video showing the confrontation between Bland and the officer.