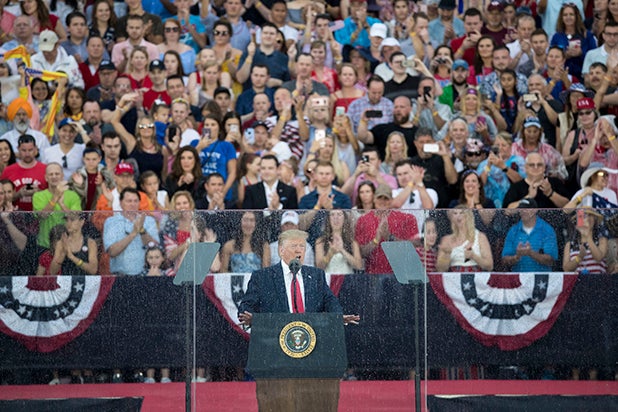 Donald Trump’s Independence Day speech delivered more than 4.6 million viewers to Fox News, propelling the cable news network above both CNN and MSNBC for the night.

According to Nielsen’s live-plus-same-day viewership numbers, the “Salute to America” speech was watched by 4.647 million people in the 6:30-7:30 ET timeslot on Fox News, despite the event’s inclement weather. In the key news demo of adults 25-54, the speech drew 793,000 viewers.

CNN, which also carried the speech, averaged 1.5 million total viewers and 353,000 in the demo.

Also Read: Trump Rips Fox News for 'Loading Up With Democrats': 'They Forgot the People Who Got Them There!'

MSNBC, which did not broadcast Trump’s address, drew 374,000 viewers overall and 42,000 in the demo during that time.

Trump’s speech was delayed Thursday afternoon after severe thunderstorm warnings in Washington D.C. threatened to cancel the event, which was held in the Washington Mall in front of the Lincoln Memorial.

The “Salute to America” event also included performances from U.S. military bands and choruses as well as a flyover from Air Force One, the Navy’s Blue Angels and military stealth bombers. The event has been met with criticisms and questions about the steep price tag from Senate Democrats and other Trump opponents.