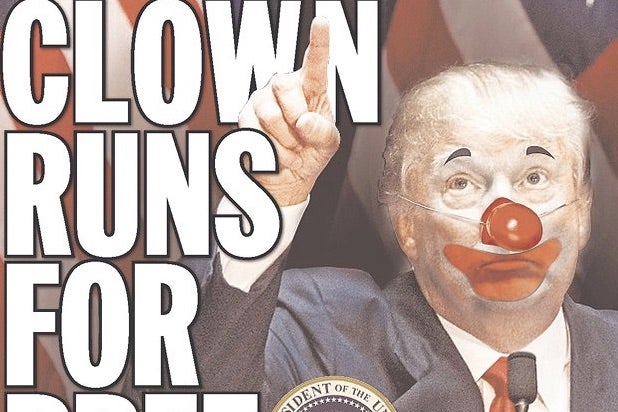 And the media was swimming in The Donald’s swagger Wednesday.

“I feel bad for the rest of the Republican field,” NBC’s “Meet the Press” moderator Chuck Todd — who Trump bashed as a moron — said on “Morning Joe,” adding that behind-the-scenes, GOP candidates and party officials look at Trump as the “skunk at the Garden Party.”

He doesn’t play by a set of rules, Todd continued: “They [other candidates] know he’s kind of a media bully, he plays by his own set of rules, he’ll say whatever, he’ll go on any platform to say it.”

“How does someone so unpopular stay so popular?” CNN’s Chris Cuomo asked, suggesting Trump might be the Ross Perot of the 2016 election.

“Is he the Ross Perot of 2016 or are we all [the media] part of a problem here fanning the flames of distraction? The answer to that last question is yes, the others are open to analysis.”

The “Fox and Friends” gang was more cheery about Trump’s announcement.

“For the first time in the campaign, I can tell you, there’s certainly this buzz about this,” Steve Doocy said, sharing conversations he had with people who loved Trump’s “populist” speech, even if it wasn’t so politically correct.

Brian Kilmeade noted Trump brings a bluntness that is missing from politics; Doocy noted the “pundit class” does not like Trump, and referenced Wednesday’s New York Daily News cover (pictured below) that dressed Trump up like a clown.

The New York Post was more kind to the Donald.

Politico is out with a bold piece on why the GOP should fear Trump, including the fact that “voters like crazy.”

And on NBC’s “Late Night,” Seth Meyers had a field day, spoofing several lines from Trump’s grandiose speech. Meyers focused on one line in particular, where Trump said he will “build a great wall.”

Meyers thinks Trump would be great in a different job that involves protecting a wall–“Game of Thrones” enthusiasts rejoice.