“This isn’t real,” Leonardo DiCaprio repeats over and over in the first full trailer for “Don’t Look Up.” He’s talking about the grim reality that a comet hurtling toward Earth will kill us all, but what’s more unbelievable is the wave of people — even Ariana Grande and Timothée Chalamet — who are only concerned with their immediate lives and not their imminent deaths.

The first teaser for Adam McKay’s “Don’t Look Up” gave an infuriating look inside the Oval Office as Meryl Streep, playing a Trumpian president, outright dismissed the news of a comet coming to destroy the planet. But that inaction and apathy extends everywhere, it seems, in this new trailer — from chipper morning news hosts played by Cate Blanchett and Tyler Perry, to a pop star played by Grande and a social media influencer played by Chalamet. It reveals a sweeping satire about not just our politics, but our 24-hour news cycle and the social media-obsessed.

“This could be a complete disaster,” DiCaprio says in the trailer. “This is already a disaster,” his partner Jennifer Lawrence responds. 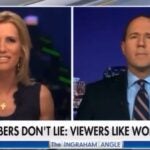 Also Read:
Laura Ingraham and Raymond Arroyo Have ‘Who’s on First?’ Moment About Netflix’s ‘You’ (Video)

Netflix plans to release “Don’t Look Up” in theaters for a brief run on Dec. 10, followed by a release on Netflix on Dec. 24.

Check out the first full trailer above.