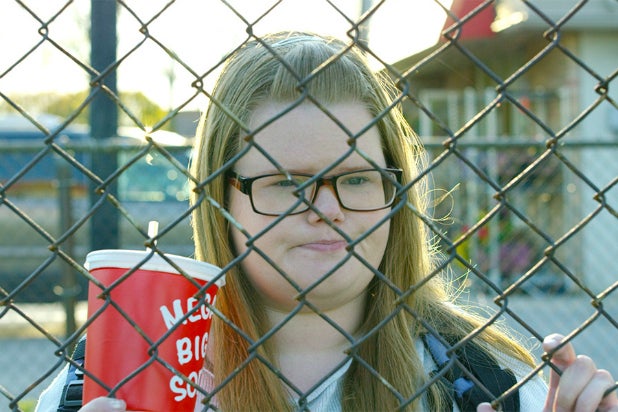 Somewhere in between introducing, in a dumpster, the titular misfit teenage girl (newcomer Michelle McLeod), and sending her into the closing credits with a few Hughes-ian moments of justifiable pride, writer-director Pat Mills (“Guidance”) manages to overcome a weakness for twee snark and easy humiliation comedy to find a suitably amusing, even touching underdog trifle. It’s nothing you haven’t seen before — save Geena Davis voicing herself as a sort of invisible friend to the movie’s outsider protagonist — yet in its modest way, it’s a comfortingly familiar serving of weirdos-forever calories.

The way Mills sets up Irene’s unpopularity, though, and the pervasive drabness of her life as captured by cinematographer Paul Sarossy (“Goon: Last of the Enforcers”), is enough to make you fear you’re heading into Todd Solondz territory, where clinical malice will completely overwhelm hope.

Overweight, bespectacled and lonely, with an overprotective young single mother (Anastasia Phillips, “Reign”) who forbids her from watching TV, having a cell phone, or accessing the Internet, Irene makes her debut not only standing in trash, but talking to a pet maggot in her hand, which she names Veronica. (As far as stacking the deck goes in rendering an outcast, this is a bit much to process in one go.) Though ostensibly aware of her nerdiness and how challenging her social chances are at school, Irene wants nevertheless to be a cheerleader — really? — going so far as to cobble together a squad outfit at home.

She also talks to her ceiling poster of Geena Davis, but then it talks back her, too. The Oscar-winning “Thelma & Louise” star, whose early narration segues into a role as omniscient celebrity deity/motivational speaker for our frumpy protagonist, convinces Irene never to quit, citing everything from her own self-consciousness in Hollywood about her height, to having survived “Earth Girls are Easy.” (Davis clearly had fun with this.)

Not surprisingly, the next day at school, Irene’s handmade uniform earns its share of laughter, but also the cruelty of a shower prank by mean girl Sarah (a snarling Aviva Mongillo) and her feckless boyfriend Robbie (Romeo Carere). (Mills comes dangerously close here to making us think anybody who’d fall for their gross ploy is brain-damaged, leading a viewer to wonder, does Irene have to be made stupid on top of everything else?) Irene and her tormentors are not only suspended, but handed a community service sentence working at a local senior facility under a harried, caustic taskmaster (Scott Thompson).

Anyone with a base movie IQ could guess how the following elements are assembled into the feel-good pivot in Irene’s story: a gruff, retired boxer (Bruce Gray, “Crimson Peak”) with self-esteem advice; a TV talent show beloved by the residents; the line “But we have nothing to cheer for,” from one scabrously-humored senior named Ruth (Deborah Grover, “Orphan Black”); and secret dance lessons. Yes, Irene decides her pom-pom dreams can be made real if she choreographs a cheerleading number with the facility’s willing aged, and arranges for an audition on “Total Talent Showdown.” Cue CeCe Peniston’s “Finally,” the help of gender-nonconforming pal Tesh (Andy Reid), the training montage, the cranky made cute, and the doubters made irrelevant.

And yet Mills succeeds at presenting the formula for finding confidence, once it gets rolling, much more than when he’s larding his first-gear mode with clunkily profane one-liners and empty nastiness. Partly that’s because there’s a general acidity to the performers around McLeod, whether allies or foes, that appropriately cuts any swelling sugariness. Nobody acts like they’re in a feel-good movie, which somehow works.

But mostly it’s that the sense of purpose in Irene — no less oddball, just more driven, and with geriatric misfits for believable friends (it helps that she sneaks in vodka for them) — makes for a more appealing heroine, and McLeod hunkers down and runs with it. Irene’s deployment of disgraced ’80s tunes as a theme of reclamation, with the help of a kind record store worker (Jacob Switzer, “Hemlock Grove”), is strangely charming; learning about Milli Vanilli, Irene picks “Blame it On the Rain” for one number.

Even her eventual pushback against her controlling mom (“I want to sext!”) earns laughs. By the time we see the finished routine, after a last round of obstacles are thwarted, the vibe is of something unpolished, nutty and joyful being freak-flag cathartic, instead of fake-triumphant.

As lightweight don’t-change-for-anybody messages go, you could do a lot more worse, and far more cynically uplifting, than “Don’t Talk to Irene.” But you also wouldn’t get to hear Geena Davis playing Geena Davis as God, for one thing.