Among the major Sundance breakout stories this year is Henry Joost and Ariel Schulman’s "Catfish," a documentary that premiered in the festival’s Spectrum section. It follows Schulman’s 24-year-old brother Nev as he forms a relationship with a woman on Facebook before realizing that she’s not the person she claims to be. 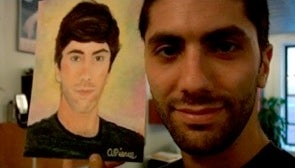 The film has caused quite a stir, and not just because it’s a marvelously engrossing portrait of the way social networking can mislead gullible users. Some viewers, myself included, have grown suspicious that much of it is a work of fiction.

The camera seems almost too ubiquitous, capturing every major plot development in the incredulous story.  One key scene, for example, involves Nev’s sudden discovery that his online girlfriend has sent him a song under the assumption that it’s a recording of her own voice, when in fact it has been nabbed from YouTube.

This red flag sets up the larger discovery of the woman’s identity, and the whole thing conveniently takes place on tape. Did the filmmakers really get that lucky?

Then, in another critical segment, the directors accompany Nev on a road trip to Michigan, where they surprise the woman they’ve only known up to that point online. However, on the official blog for the filmmakers’ production company, there is no mention of any such trip — nor any of the other tantalizing details of this alleged weird-but-true odyssey.

A publicist for the film contacted by TheWrap insisted that the movie’s story was real.

In an interview with the directors included in press notes, Joost says that the duo had only shot two or three hours of footage prior to the discovery of the stolen song. "After the discovery, we probably shot 16 hours a day," he says. "All in all we shot over 200 hours of footage … It was fascinating to step back and look at the story in its entirety, through the lens of our discoveries in Michigan."

Indeed, Joost’s most telling comments come in later sections of the interview, which are sealed off by a sticker in the press notes in the hopes of preventing readers from spoiling the film before they watch it. "We film each other for fun all the time," he says. "The fact that something unexpected happened while we were filming is no surprise."

The back-chatter can’t be hurting future prospects for the film. "Catfish" has generated enough buzz to bring it into the distribution game, though it has yet to land a deal.

An interview with Joost and Schulman that was scheduled with TheWrap earlier in the week was canceled because the duo had "meetings," possibly implying that a bidding war had begun, and one rumor going around Park City suggests that HBO is circling.

Other whispers about the directors’ ambitions may negate that possibility. According to some insiders familiar with the film, Joost and Schulman want the movie to sell big to a studio and play at multiplexes around the country, much as "Paranormal Activity" did when the micro-budgeted feature landed distribution with DreamWorks after its premiere at Slamdance in 2008.

Curiously, at a screening last weekend, one audience member praised the movie’s authenticity in provocative terms. "People always talk about ‘Paranomal Activity’ and all that horses—," he said, "but this is real suspense."