DreamWorks Animation’s “How to Train Your Dragon” finished atop the smallest overall weekend box office of the year, taking in $15 million, according to studio estimates.

And no, there will be no flip-flopping of the Nos. 1 and 2 spots once the Monday-morning actuals come in — the 3D “Dragon” easily beat out this week’s new wide releases, CBS Films J.Lo rom-com “The Back-Up Plan,” which debuted in second place to $12.3 million and Warner Bros.’ Joel Silver-produced comic-based action film, “The Losers,” which finished in fourth place with $9.6 million.

Costing about $35 million to produce, and pairing Jennifer Lopez with CBS Network omni-presence Alex O’Loughlin ("Moonlight," "Three Rivers"), the poorly-reviewed “Back-Up Plan” actually exceeded some pre-release tracking projections that had it opening to under $10 million.

“We’ll make money on this — it’s good to see the numbers in the black,” said CBS Films distribution chief Steven Friedlander, noting that the film scored a so-so B CinemaScore grade from movie word-of-mouth tracker CinemaScore. 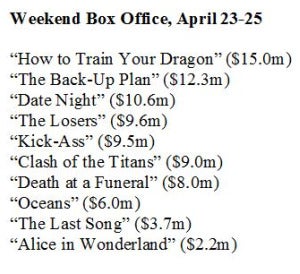 Skewing about 70 percent female, “Back-Up Plan” had to share some of its audience with Fox’s “Date Night,” Fox’s three-week-old Shawn Levy-directed rom-com pairing of Steve Carell and Tina Fey, which finished third with $10.6 million.

For its part, the PG-13-rated “Losers” had to share part of its male audience with Lionsgate’s R-rated and also-comic-book-inspired “Kick-Ass.”

Budgeted at around $31 million, produced under Warner’s Dark Castle Label, and featuring a B-level ensemble cast led by “Avatar’s” Zoe Saldana, “Losers” also beat out middling pre-release tracking that had it doing well below $9 million.

Its performance was just good enough to edge week two of “Kick-Ass,” which grossed $9.5 million and now has banked $34.9 million. Lionsgate acquired domestic rights to the movie, independently produced by director Matthew Vaughn, for just $15 million.

Another new release cracking the top 10 this week was the French-made family-targeted echo film “Oceans,” which Disney put into 1,206 theaters. The film grossed $6 million over the three-day weekend period, which was right around Disney’s projections.

This scenario seemed highly unlikely five weeks ago, when “Dragon” debuted to a disappointing $43.7 million, compared to “Monsters’” $59.3 million on the same March weekend in 2009 – a result that prompted Wall Street to crater DreamWorks Animation stock the following Monday. 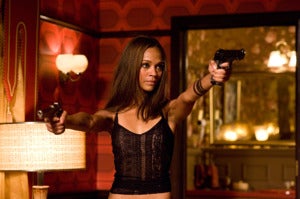 But buoyed by great word of mouth (A CinemaScore) and the best Rotten Tomatoes overall grade of the year (97 percent fresh), “Dragon” has dropped off minimally week to week. In fact, it’s decline this weekend was just 25 percent.

Budgeted at $165 million, “Dragon” should easily surpass “Monsters’” $198 million domestic total. And with $177 million in foreign grosses going into the weekend, it should beat “Monsters’” $183.2 million international total, too.

Overall, the domestic box office tallied just over $92 million, according to one studio’s estimate, which represented about a 15 percent drop from the same weekend last year.

“The only thing surprising to me this weekend was the size of the pie being so small,” said CBS Films’ Friedlander.

For his part, Friedlander expressed some degree of satisfaction over a “Back-Up Plan” opening that, at $12.3 million, more than doubled the bounty of CBS Films’ first-weekend gross of $6 million for “Extraordinary Measures” in January.
x
Looks like you're enjoying reading