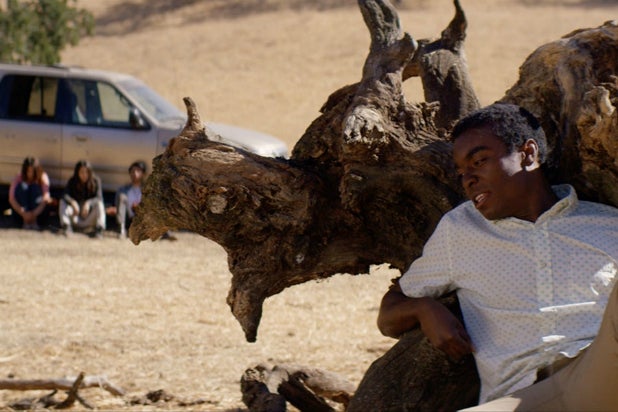 When bodies fall in “Downrange,” they make an unbearable noise: a squelching, like taking a tomato in your hand and crushing it in one clench. This happens to a group of college students on a road trip who are ambushed on the side of the road by an unseen shooter, and in just a few moments at the beginning of the film, it seems like half the group has dropped dead, gaping holes their new physical characteristic.

But these bodies had little life to begin with, for however lively “Midnight Meat Train” director Ryuhei Kitamura’s filmmaking can be, “Downrange” is a film that suffers fatally from bad performances and horrendous writing. How are you supposed to care about the stranded when their groans make you wish you could put them out of their misery?

By the time half of our ostensible ensemble has dropped dead, we only begin to learn any of the characters’ backstories: one of them is an army brat named Keren (Stephanie Pearson, “Insidious: Chapter 2”), hence her knowledge that the sniper took off his silencer in order to avoid suppressing the velocity of the bullet. “It must have made a big enough difference,” she says to one of her companions earnestly.

The three of them lean against the only safe side of the SUV, while the one black character is 50 feet away, hiding behind the remains of a tree, alone. It’s a tale of survival that asks you to empathize with the characters not necessarily because they do or do not deserve it, but because they’re there, they’re bodies that supposedly have weight. Not life, but weight.

“Downrange” is basically an amalgamation of a desert-island movie, a bottle episode of a show, a survival film, and something like “Grand Piano” with a little bit of Ben Wheatley’s “Free Fire” mixed in: of a bunch of random people whose connections are tenuous in one place at one time, all under fire. They’re just supposed to survive, and the audience is just supposed to watch how well they succeed at that. The game is so simple; the players aren’t so much boring as they seem to be just little bots running around, getting knocked off one at a time, and the rules are not especially interesting or clear.

Kitamura’s and screenwriter Joey O’Bryan (“Motorway”) — both share a story credit — seem only interested in these people as far as their physicality, a physical being that’s tactile and loud, textural as far as the practical effects go. But these characters are disposable in a flat way, not even in the cynical, even cavalier, manner of Ridley Scott in “Alien: Covenant.” At least there, you have a whole world and a sense of identity for each character. “Downrange” just seems boringly cruel, an excuse to put imaginary mice in a maze and have a grizzly bear tear it all up. Werner Herzog would not approve.

Also Read: Toronto Film Festival Thanked Native Tribes for Use of 'Their Land' at Every Gala Screening This Year

In particular, this film, however violent and bent on showing death it is, isn’t interested in violence or death itself. In this wide-open, wheat-colored range, an ironic rendition of “Happy Birthday to You” won’t make much of a difference since the film wasn’t much interested in life in the first place. The trouble with “Downrange” is that it doesn’t seem intrigued by much of anything other than the spilling of entrails.

That’s a shame, because there is a bit of potential in the film, a kind of post-9/11 pessimistic rumination on an era of paranoia that pervades every landscape. “Downrange” may want to be the slasher-film equivalent of post-9/11 drama — the army brat character, the shooter in camouflage, the bird’s-eye view of some of the shots recalling a drone — offering a cathartic release, a cinematic way to work through the trauma of the last decade and a half, the anxiety that is perpetuated through populist rhetoric that someone could attack at any time. But “Downrange” lacks the detail, the intelligence, and the pathos.

Also Read: 4 Lessons to Make a Gothic Horror Movie on Time and on Budget (Guest Blog)

These performances don’t add life to these characters, rather an impression of a caricature-like sprawl for something to grab onto. Everyone is intense, very intense, but wild grunting and growling and crying do not necessarily a carefully illustrated performance make. It means that the totality of these deaths do not, in the grand scheme of things, matter, to this film or to the world of cinema.

The inventiveness of the deaths is limited, and the geography of the film’s setting limits what kind of world its characters can create. The film is as barren of uniqueness or anything else compelling as the actual landscape is of foliage. “Downrange” is full of sniper-based butchery, but with no context — narrative, emotional, or political — the “war zone” (as the press notes call it) is more of a snore zone.