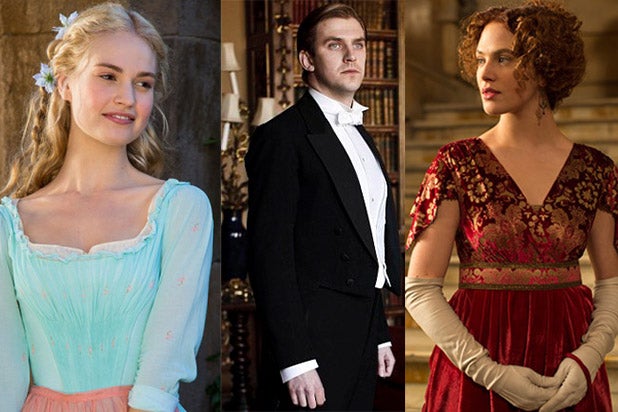 They’re not as famous as the Beatles, but the stars of the hit TV series “Downton Abbey” have launched their own British invasion. And it is likely to intensify with last week’s news that next season will be the show’s last.

Two “Downton Abbey” alums have already landed high-profile roles in Disney films — Lily James in the recent hit “Cinderella” and Dan Stevens in the upcoming “Beauty and the Beast.” Several others appear close to hitting it big stateside as well. But the path to Hollywood’s glitz and riches hasn’t happened overnight for any of them.

Warner Bros. figured out that Brits worked in superhero movies years ago. Christian Bale was Christopher Nolan’s Batman in the blockbuster “Dark Knight” trilogy which launched in 2005, and Henry Cavill flew high as Superman in the studio’s 2013 hit “Man of Steel.” So the “Downton Abbey” cast looking to Hollywood might be news for fans, but it’s not to casting directors like Marci Liroff.

“None of these people are discoveries,” she told TheWrap. “They’ve been on the British stage and TV for years, so we know them well. But we are very excited that they’ll be more available. In the past we’ve had to wait until they’ve been on hiatus.”

James, who plays Lady Rose in the PBS drama, landed the lead as the classic princess in Disney’s live-action fairy tale “Cinderella,” a hit with $335 million at the global box office. She was trying out for one of the stepsister roles when director Kenneth Branagh decided the glass slipper fit James better. The role she originally wanted went to fellow “Downton” actress Sophie McShera, who plays assistant cook Daisy Mason.

Stevens recently landed the plum male lead in “Beauty and the Beast” and will star opposite fellow Brit Emma Watson in Disney’s next fairy tale update, scheduled for release in March 2017. He played Matthew Crawley, until his exit from the show forced a storyline where the handsome heir to the Downton estate died in a motoring accident, leaving his wife Lady Mary (Michelle Dockery) a widow. Steven’s sudden departure for the U.S. in 2012 forced a storyline that shocked fans.

Almost as surprising, the string of box-office misfires he appeared in before finally connecting.

He labored in the flops “The Fifth Estate,” “The Guest” and “The Cobbler,” and then in the Liam Neeson thriller “A Walk Among the Tombstones,” another commercial miss. But things took off after he played Sir Lancelot in the Fox sequel “A Night at the Museum: Secret of the Tomb.”

Stevens now has four films in post-production including the 2016 New Line romantic comedy “How to Be Single” and the John Travolta crime drama “Criminal Activities,” which debuts on June 1. But he hasn’t forgotten his roots.

“Oh it is quite possible that none of us in ‘Downton’ will ever again get the ratings this has had,” Stevens said in an interview with London’s Telegraph. “But from a career point of view, it has opened so many doors.

Also Read: Dan Stevens to Play the Beast Opposite Emma Watson in Disney’s ‘Beauty and the Beast’

Stevens is still flying under the radar of most people outside Hollywood however, and that may not change until “Beauty and the Beast” rolls out. That was the case for James as well, who was largely unknown in the U.S. before landing her breakout role in “Cinderella.”

She will also appear in the Cross Creek action movie “Pride and Prejudice and “Zombies,” set for a February 2016 release by Warner Bros. And she’ll appear in a new BBC adaptation of “War and Peace.” But she hasn’t forgotten where her success was launched, either.

“I know I wouldn’t be here now if it were not for ‘Downton,’” she told the London Express.

In 2012, Jessica Brown Findlay became the first major cast member to leave the show for Hollywood, and her character Lady Sybil was killed off during childbirth in the third season. She got a big break when she was cast opposite Colin Farrell in last year’s “Winter’s Tale,” but it bombed.

After starring in the TV costume dramas “Labyrinth” and “Jamaica Inn,” she’ll be back on the big screen in October, opposite Daniel Radcliffe and James McAvoy in Fox’s “Victor Frankenstein.”  And she’s in the running for the female lead role in a remake of “The Crow.”

Most of the “Downton” actors are capable of going straight to the big screen, even if they don’t have many movie credits, Liroff said.

“A lot of them have extensive experience on the stage and on British TV which, because of its high production values, is like making a movie every week,” she said. “And most of them have been trained in the theater or in British drama schools, so they have a real foundation and training, unlike most American actors.”

Michelle Dockery appeared in the action thriller “Non-Stop” last year. She’ll also be in July’s “Self/Less,” with Ryan Reynolds and Ben Kingsley, so her Hollywood profile is growing.

Meanwhile, castmembers Joanne Froggatt (Anna Bates), Laura Carmichael (Lady Edith) and Allen Leech (Tom Branson) all met with Hollywood agencies when they were in Los Angeles for the Screen Actors Guild Awards, according to the U.K.’s Western Daily Press. Leech has landed roles in several movies including Oscar-winning “The Imitation Game.”

Somewhere else we may eventually see the “Downton” cast — in a movie version of the series.

Gareth Neame, who produced “Downton Abbey” with Julian Fellowes, brought it up at a news conference last week.

“It’s something that Julian and I have been contemplating and would be a wonderful extension,” he said.