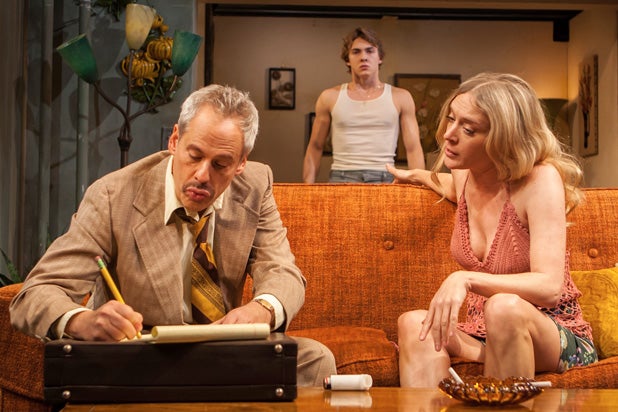 “The Kids Are All Right” is what Lisa Cholodenko called her 2010 film about a lesbian couple’s two teenage children. It’s a title that also accurately sums up Seth Zvi Rosenfeld’s new play, which he instead calls “Downtown Race Riot.” Presented by the New Group, the drama opened Sunday at Off Broadway’s Pershing Square Signature Center.

“Downtown Race Riot” is about a drug-addicted mother’s two teenage children, and unlike the two moms in the Cholodenko movie, Mary Shannon (Chloe Sevigny) is a truly dreadful parent. But her kids, Joyce (Sadie Scott) and Jimmy (David Levi), are going to be all right.

To gin up dramatic tension, Rosenfeld keeps dangling the threat of a race riot in Washington Square Park. (Mind you, this is the pre-gentrified Village of 1976.) The question is, will Jimmy and best friend Marcel (Moise Morancy) show up for the riot or won’t they?

In “West Side Story,” the rumble is pretty clear cut. It doesn’t require a lot of explaining. Rosenfeld, on the other hand, spends more exposition on the negotiations for this violent confab in the park than the Allies needed to invade Normandy.

Also involved in these around-the-kitchen-table talks are two young wannabe thugs (Christian DeMeo and Daniel Sovich) who have apparently memorized the “Godfather” movies and dress accordingly. Amid all the back-and-forth tough talk, Scott Elliott’s direction produces a lot of dead air in which we, the audience, wait for mom to turn off “All My Children” in her bedroom and re-enter the action in her kitchen.

It would be easy to credit Sevigny with single-handedly slapping an otherwise flaccid drama into shape. But Rosenfeld’s writing for her mother character is simply sharper than it is for the others, especially the ways in which this playwright shapes Mary’s relationships with her two children and Marcel. At one point, she presents a very convincing argument for letting him have sex with her daughter in the next room.

Mary is more friend than mother to Jimmy and Joyce, and sometimes not a very good friend. She’s strung out and not much help when her son appears to be suffering from an asthma attack. Later, she instructs him to feign lead-paint poisoning in order to fool a social worker/lawyer (Josh Pais). Her job consists of milking the welfare system, and she’s proud of the life her devious lies has made possible.

When Sevigny’s Mary professes love for her family, she convinces us of that love despite all the character’s abysmal conduct to the contrary, and that includes trying to screw the social worker in front of Jimmy. This sex scene is broadly played and funny and, frankly, belongs in another play (a much better play), but it does help to amplify the mother’s very theatrical sense of humor. When Joyce says she wants to leave home, travel around Europe and make money picking grapes, Mary wonders why her daughter wants to be a “migrant worker.”

Joyce will do fine in Europe, just as Jimmy, who’s always in the kitchen broiling burgers, has all the makings of an excellent short-order cook. It’s doubtful from all his riot angst that Rosenfeld would agree, but these kids show every sign of surviving a terrible, though fascinating mother. “Downtown Race Riot” leads one to wonder if more parents shouldn’t do heroin.