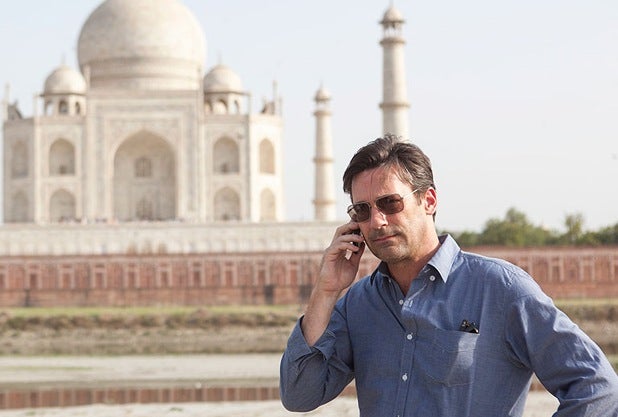 Once a popular staple at the box office, they have become underdogs in an increasingly international business where American sports don’t always travel. But that hasn’t stopped Hollywood from making sports movies — or trying to score another box office or critical success like “The Blind Side” or “Moneyball.”

Five sports movies are on this year’s calendar, beginning with Summit Entertainment’s “Draft Day,” which opened with a disappointing $9.7 million over the weekend. Freestyle Releasing opens the golf movie “From the Rough” later this month, Disney’s “Million Dollar Arm” and Sony’s “When the Game Stands Tall” will open during the crowded summer season, with Disney’s Kevin Costner track saga “McFarland” set for November.

Sean Bailey, Disney’s president of production, said the studio is feeling good about “Million Dollar Arm” and “McFarland.” Regardless whether the studio manages to strike “lightning in a bottle” as Warner Bros. did with “The Blind Side,” he expressed satisfaction with the way they turned out.

Disney’s “Million Dollar Arm,” starring Jon Hamm, is ostensibly about baseball, but won’t feature a single baseball game. Instead, it dramatizes the true story of a baseball scout traveling to India to recruit cricket players — an international component that’s a bonus in today’s box office arena.

“I wouldn’t say there was a calculated effort to change the nature of narrative to adjust to changing business climate,” Bailey said. “The world is just changing. JB Bernstein went to India because the Yao Ming phenomenon had happened.”

Because even domestic hits like “Moneyball” didn’t play strongly overseas, there’s extra pressure to have a story line compelling enough to convince backers that a project can appeal to non-fans. As a result, budgets have shrunk.

“We are looking at the numbers for these movies pretty hard, and we don’t have the cushion that may have been there in the past,” Bailey conceded.

“It’s more difficult to make any movie now, but sports movies are as difficult as they come because they are hard to travel with,” Erica Huggins, president of Imagine Entertainment, told TheWrap.

Yet Imagine has been one of the most frequent producers of the genre, making “Friday Night Lights,” “Cinderella Man” and “Rush,” with several more on the way — including a biopic of Brazilian soccer icon Pele.

“If done well, sports movies tell us something about our time and culture,” Imagine production president Kim Roth explained.

Sports movies, which date all the way back to the Charlie Chaplin era, have gradually lost their luster in the past decade. “A League of Their Own,” released in 1992, is still the top grossing baseball movie domestically with $107.5 million. Movies like Legendary Pictures’ “42,” a sleeper hit in the U.S. last year, did not get an international release.

(See football and baseball movie charts below. Story continues after the charts.)

Nine of the ten highest-grossing football movies opened between 1998 and 2006. “The Blind Side,” which has grossed nearly $310 million worldwide, is the one exception, and it exemplifies Hollywood’s increasingly important formula for sports movies: Heavy on emotion, light on the games.

Based on Michael Lewis’ book about Michael Oher and the growing importance of the outside tackle-position in football, the movie emphasized the personal relationship between Oher and his adoptive family. Of course, having an A-list star like Sandra Bullock didn’t hurt either — and she won an Oscar for her performance.

Successful sports movies often play up the personal side, whether it is Billy Beane’s family in “Moneyball” (another Lewis book) or the personal travails of Jake LaMotta in “Raging Bull.”

The inspirational tone has become more critical today, since the primary demographic for most sports films — young people, and males in particular — have become distracted by video games, 24-hour sports cable sports and other digital entertainment options. Sports comedies, like Charlie Sheen’s “Major League” in 1989, have fallen out of favor.

“Sports movies, especially comedies, used to be the one of the best forms of fun for males under 25,” said Mandalay Pictures executive David Zelon, who produced 2011’s “Soul Surfer,” the highest-grossing live-action surf movie ever. He’s also producing “The Game Stands Tall,” the story of the championship DeLaSalle High football team that Sony will release in August.

“Now you’re competing with Madden Football and Facebook,” Zelon said. “There are so many other things pulling away their interest that are cheaper and easier now.”

Still, Hollywood keeps churning them out because, as one executive said, “a lot of people who work in this business have a sports movie in their top five.”

Like “Draft Day” before it, “Million Dollar Arm” and “The Game Stands Tall” will open against movies that cost more than $100 million to make. Underdogs to the end.